There are many things Matthew Heinrich has learned throughout his whirlwind research project manufacturing personal protective equipment (PPE) for frontline health care workers. But two of the most important are: a seemingly simple problem may not be easy to solve—and finding a solution may turn out to be very important.

In many ways, Matt explains, this project has brought him back to the basics. One of his greatest design challenges was solved by using a hole puncher. “It was amazing and ironic that our scalability issue could be solved so simply,” describes the fifth-student in MAE at Princeton, “but until we realized that, it was not an easy problem at all.”

Ever since the COVID pandemic hit in early March 2020, Matt’s research group —and countless other volunteers including fellow students, neighbors, and friends—have been working tirelessly to fabricate desperately needed supplies of PPE for Penn Medicine Princeton Medical Center. Matt, who studies collective cell migration and tissue engineering, added to that list “at-home manufacturing” for several months to provide this lifesaving equipment for doctors and nurses. In the first phase of the project, Matt coordinated a team of volunteers that produced 2,000 face shields. During the second stage, Matt and the team are making over 1,000 custom covers for specialty protective devices called PAPRs, or Powered Air Purifying Respirators, which healthcare workers use in situations with the highest risk of COVID exposure.

“At the time we had no idea if our designs would actually get to the people that needed them,” recalls Matt, who was in a critical phase of his own research project when he first heard about the shortages. “But we felt we had a responsibility to try. I remember Tom Zajdel, a postdoc in my research group, saying that our data would still be there in three weeks, but that we did not know what those three weeks would hold for the public health crisis.”

The journey first started in early March during the first days of the COVID-19 pandemic. Over the last year, Matt’s co-advisor Daniel Cohen, Assistant Professor of Mechanical & Aerospace Engineering, had been running seminars with physicians from local hospitals. The monthly speaker, who was from Penn Medicine Princeton Medical Center, discussed projected hospital shortages. Matt and his colleagues were inspired to work on producing PPE, and in particular, face shields.

The challenges could not have been steeper. Materials were out of stock everywhere, the project team could not meet in person, and the labs that contained the high-tech equipment they needed were closed in accordance with social distancing. “We did not sleep much that first week or so,” he describes. “I remember waking up at 4am with an idea for a headband design and not being able to go back to sleep until I tested it. It was how we launched the project so quickly.”

On top of that, they needed to make 2,000 face shields in only two weeks to meet the demand. At the time, the five members from the research group that were in town could only make a few hundred in a weekend if they worked around the clock.

“We were never going to meet the need,” explains Matt. “It became my brainchild to figure out how to scale up.”

Despite these roadblocks, Matt and his group came up with an alternative design that could be made at home by a volunteer without any special equipment. To construct the face shield, they attached adhesive foam weather stripping to clear, pre-cut binder covers and added a head strap using VELCRO.

Then, Matt developed an organizational structure for teams of volunteers to distribute materials and assemble shields, all without coming in contact with other team members. “I focused on putting together kits with materials for 100 shields each and creating instructional videos. A team captain would then transport the kits from my curb to the volunteers. Once the volunteers finished making the shields, they would box them up for delivery back to me,” recalls Matt.

Matt teamed up with Alex Riordan, a graduate student in neuroscience, to reach out to friends, fellow graduate students, and neighbors about volunteering, and the word spread fast. In only a few days, 40 or so volunteers were rolling up their sleeves and ready to work. Matt and Alex coordinated teams, and two weeks later, 2,000 face shields were delivered to the hospital.

“Matt really drove through getting our prototypes into full production form by working tirelessly to design our PPE ‘kit’, engaging with companies to mass produce components of the kit, coordinating a volunteer network to assemble these kits into PPE, and then getting these items to the hospital,” says Professor Cohen. “He has been fantastic and extraordinarily generous with his time and mental energy throughout this process, while also working on data analysis for his primary research area.”

Matt refused to rest while the face shields were out for assembly. Penn Medicine Princeton Health was also running out of covers for their crucial Powered Air Purifying Respirators (PAPRs). To create an airtight seal around the face, a disposable shield cover—that could only be used once—had to hook onto the helmet part of the respirator, cover the face with a shield, and stretch to seal underneath the chin.

At this point, Matt was cleared to work on PPE projects in the lab, and he came up with a new cover design by laser-cutting a thin piece of plastic with attachment holes and bonding it to one of his lab’s favorite materials: thin silicone rubber.

Matt delivered the prototype PAPR cover to hospital administration, and it was approved right away. But instead of asking for a few dozen like he expected, the hospital requested 1,000 units of the new PAPR cover design. To make things worse, by this time they had only three covers remaining in the entire hospital with no other potential suppliers for covers, so they needed two dozen immediately and 200 more in about a week.

It took Matt 45 minutes to make one shield, so he had a similar scale-up problem as before. He couldn’t use the same volunteer strategy that worked for face shields because the holes cut in the top of the shield needed to be so precise that they had to be cut with equipment from the lab, which only he had access to.

“If the openings were less than 1/16 of an inch too big or too far apart the cover would be too loose, and if they were 1/16 of an inch too small or too close together it would not attach to the helmet,” says Matt. Then, he realized that a simple hole puncher was the exact same size as the hole openings on the cover; paired with a guide stencil, it could then achieve the size and spacing precision needed. Matt quickly made stencils and ordered hole punchers to create PAPR cover assembly kits, and the volunteer team started working.

The team was able to make 25 covers right away and 200 more within a couple of weeks, which the hospital now estimates will last until mid-June. In the meantime, Matt worked with the silicone supplier to pre-cut all the materials at the factory, so the remaining 1,000 shields will be much easier to make and should last the hospital through the end of the year.

Matt says the magnitude of the situation is still sinking in. “Every now and then I stop and think that this graduate student and his labmates have had the opportunity to keep hundreds of doctors and nurses safe,” he explains. “It feels overwhelming and humbling, but it is also a great relief that we could do something to contribute. The project was an incredible community effort and I am so grateful to all the volunteers. We can all look back and know we made a difference during one of the most challenging times in our lives.” 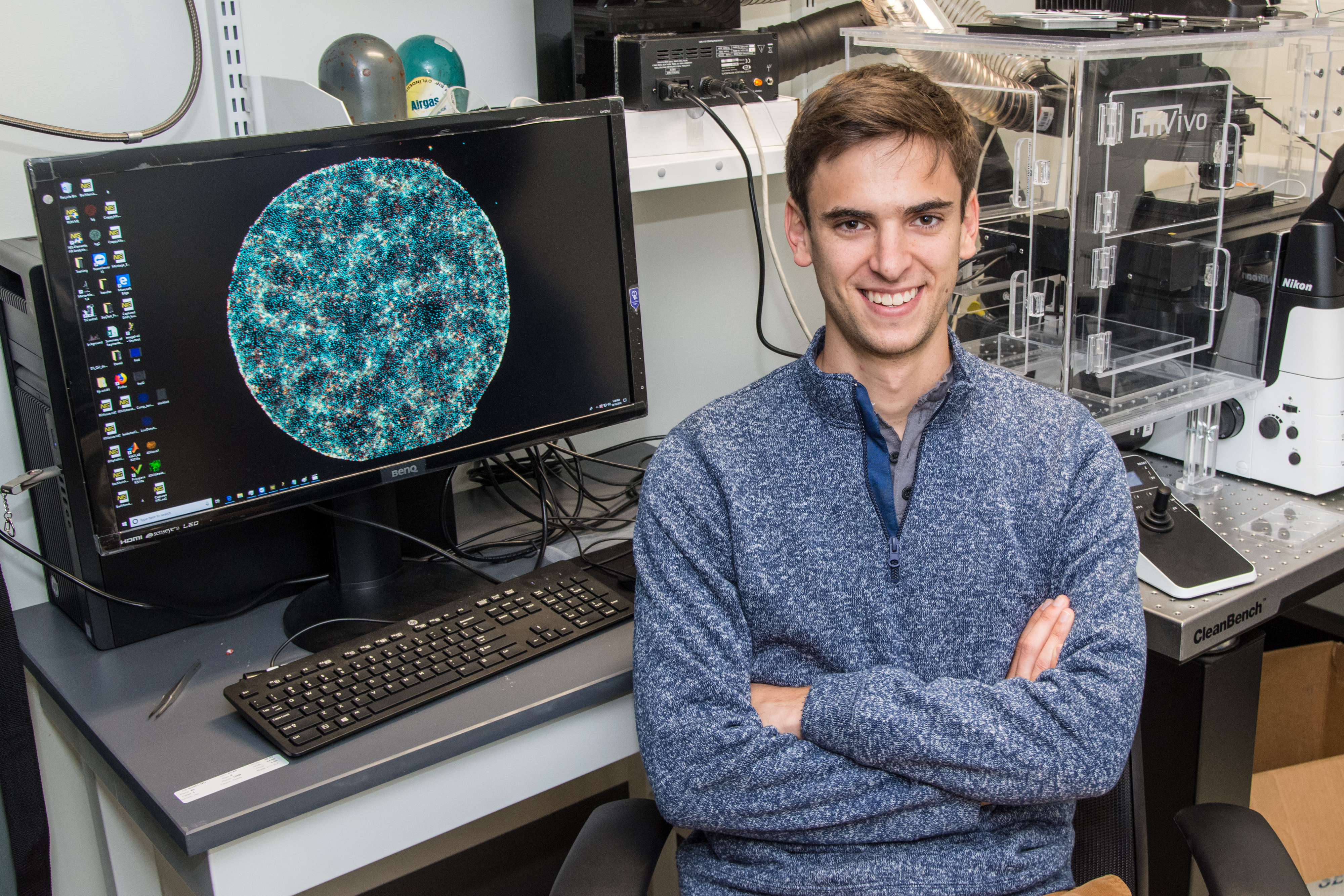