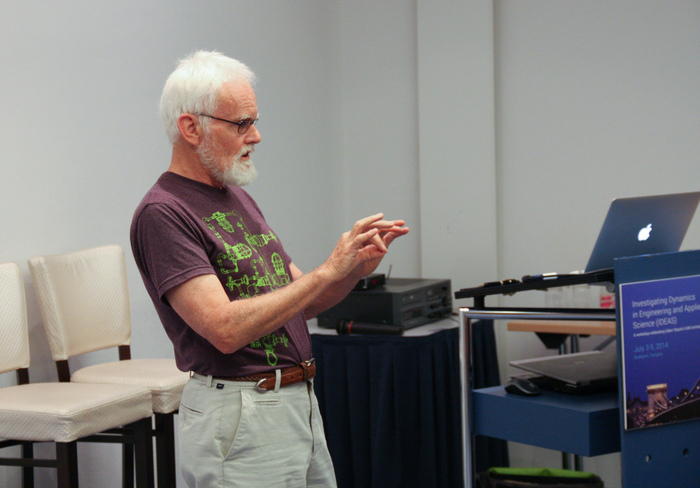 Since 1994 he has been Professor of Mechanics and Applied Mathematics at Princeton University, where he directed the Program in Applied and Computational Mathematics until 1997, and again in 2010-11. He is an associated faculty member in the Department of Mathematics and the Princeton Neuroscience Institute.

Professor Holmes retired effective July 1 2015 and while he continues research as a Senior Scholar, as an Emeritus faculty member he cannot serve on graduate or undergraduate committees.

In 1981 he was a Visiting Scholar in the Department of Mathematics at the University of California, Berkeley. From 1981-86 he was Director of the Center for Applied Mathematics at Cornell. In 1985-86 he held the Chaire Aisenstadt of the Centre de Recherches Mathematiques, Universite de Montreal; in 1988-89 he was a Sherman Fairchild Distinguished Scholar at the California Institute of Technology and, in 1993-94, a John Simon Guggenheim Memorial Fellow. He was elected a Fellow of the American Academy of Arts and Sciences in 1994. In January 2000 he held a Visiting Professorship at the Paul Erdös Mathematical Center, Budapest, Hungary, and in 2001 he was elected an Honorary Member of the Hungarian Academy of Sciences.  Dr Holmes has taught courses at all levels from freshman to advanced graduate, and conducted seminars in dynamics and applied mathematics.  He helped Ingrid Daubechies develop 'Math Alive:' an applied mathematics course for non-science majors. He has published over 280 papers, articles and reviews. He has supervised 37 PhD and 3 MSc theses and mentored 26 postdoctoral fellows.

Dr. Holmes works on nonlinear dynamics and differential equations, developing qualitative and analytical methods for studying mathematical models of solid, fluid, and biological systems. He has contributed to the mathematical foundations and applications of dynamical systems or 'chaos theory,' and has used these ideas to better understand the dynamics of coherent structures in turbulent flows, pattern formation in chemical reactions over thin catalysts, nonlinear modes in optical waveguides, and constrained buckling of elastic rods. His current interests focus on the neuromechanics of legged locomotion and swimming (or why it's hard to catch cockroaches and lampreys), and modeling cognitive processes. His work has important technological implications for the design of vehicles and turbomachinery and the development of new materials and devices, including smart and nimble robots, and it requires the posing and solution of beautiful problems in neuroscience, cognitive psychology, mechanics and mathematics. He is co-author, with John Guckenheimer, of a textbook on dynamical systems; with John L. Lumley and Gahl Berkooz, of a monograph on low dimensional models of turbulence; with Florin Diacu, of Celestial Encounters: an historical account of the people and ideas at the roots of 'chaos theory,' and, with Robert Ghrist and Michael Sullivan, of a monograph on knotted orbits in three-dimensional flows. The second edition of "Turbulence, Coherent Structures, Dynamical Systems and Symmetry," with an additional chapter by Clarence W. Rowley, appeared in 2012.  Dr. Holmes has also edited several collections of papers and he is an Editor in Chief of the Springer Verlag Applied Mathematical Sciences and Texts in Applied Mathematics book series.  Examples of his pedagogical work appear on the web-based peer-reviewed Scholarpedia; see: http://www.scholarpedia.org/article/History_of_dynamical_systems http://www.scholarpedia.org/article/Stability

Poetry
In another life, he has published four collections of poetry; the second won an Eric Gregory Award (UK Society of Authors) in 1975 and the third was a Poetry Book Society recommendation for 1986.

These books are available from Carcanet Press: http://www.carcanet.co.uk/ : Philip Holmes