Zirui Liu has always been interested in rockets, space, travel and “blowing stuff up,” he says with a laugh. In fact, the likable third-year grad student initially became interested in the engineering and aerospace fields as a result of his voracious reading habit.

As a child, Zirui read a lot of biographies. The biography on Isaac Newton introduced a love of mathematics and science. His interests in chemistry and physics only deepened after learning more about Albert Einstein and the first female Nobel prize winner, Marie Curie. And, somewhere along the way he read about combustion. He followed along from M.M. Pattison Muir’s page-turner The Story of the Chemical Elements that mentioned using flame to heat up salt, bones…it was a great idea until his parents found out, that is.

Then there was that other time he says, “When I was about 8-years-old,” Zirui explains, “I would buy matches and light the grass on fire in the lot near my house. My parents weren’t very happy about that.” He did it a few more times after that, though. How else is a budding scientist supposed to learn about combustion, right?

Growing up, his favorite subjects were science, math, and especially, the history of mathematics. His main hobbies were reading and basketball. “I was always reading,” he says, “or I was playing basketball with friends. We were pretty good. We would make up our own teams for fun.”

Zirui comes from Fuxin, China, also referred to as the “Agate City” since roughly 90% of the country’s agate products are mined in the agricultural region. He says, “Fuxin is a nice city with mountains, rivers, and one main street, similar to Princeton.”

When he was younger, Zirui traveled frequently with his parents. He enjoyed the skyscrapers in the big city of Shanghai, and desert and mountains of western China, and visited other regions in China as well.

Honor and duty to country are proud aspects of his parent’s work in government offices.  Zirui’s mother works in the Environmental Protection Department that safeguards forests and wild animals—clearly her appreciation for nature seeped into family life and gave Zirui his fondness for the outdoors.

During high school, the push to study for college entrance exams was priority for students. He explains, “It is very competitive to get into college, and after school we all focused at home on studying for the exams.” He knew what he wanted to study, though—aerospace engineering.

Around this time the first maiden flight of Dragon was launched by SpaceX. Naturally, anyone interested in combustion was riveted by the fascinating news unfolding about the reusable cargo spacecraft. For Zirui, it solidified his desire to combine his interests in math, science, combustion, and space into a major. Zirui’s hard work paid off when he was accepted into Tsinghua University in Beijing, China, in the Aerospace Engineering program.

Not one to let that wanderlust go too long, Zirui managed to fit in some excursion time with friends while completing his undergraduate work. He says, “We traveled to Tibet, Beijing, and Shanghai. We saw many beautiful mountains, lakes, and went into the sacred mountains of Mount Nojin Kangsang. It was a life changing experience to see new cultures and become immersed in them.”

So, how exactly does one from China hear about Princeton University in New Jersey? Zirui is quick to explain that the university and faculty reputations are world renowned. He says, “It’s the best school for combustion and the professors are the best. This is the leading research department with long histories of studies into combustion. Combustion is very important if you are interested in space.”

In 2017, Zirui was awarded the MAE Second Year Fellowship. He also took 2nd place in the Aeronautic and Aerospace Design Competition at Tsinghua University, and won the National Academic Scholarship also in China. He is much too humble a person to boast about these accomplishments. As a result, he ended up sharing his knowledge by spending Fall 2018 semester as a Teaching Assistant helping students with Mathematical Methods of Engineering Analysis I (MAE-APC 501). “It was a very good experience,” Zirui says, “I learned a lot on how to explain problems clearly and in different ways. Also, I met a lot of nice students.”

In addition to the kindness of students, Zirui says the professors at Princeton are very understanding and really care about students doing well in their studies. He also appreciates the architecture of the campus buildings. Of course, he has done a bit of sightseeing since arriving in the U.S. He has been to New York several times and visited the Statue of Liberty and Times Square. Zirui got rather adventurous when he traveled to California and drove from LA to San Francisco—easily a six hour drive. While there he toured Hollywood, LA, San Francisco, and marveled at the architecture of the Golden Gate Bridge. In the summer before arriving at Princeton University he traveled to Iceland, and he also went to Alaska to see the Aurora Borealis. But, as Zirui explains, “It was snowing, so we didn’t get to see the lights, but the mountains were very beautiful.”

His current research project in Professor Law’s group is on Laminar and Turbulent Flame Propagation Under the Effect of Flame Instability. Zirui says, “I am trying to see the interaction between flame instability and turbulence. This could be applied to real engines because the flame instability appears when the pressure is high and in engines the flow is turbulent.” This research could be applied to auto and airplane engines.

As a third-year grad student, Zirui has been weighing options when he completes his degree. Regarding his future, he says, “I would like to work as faculty at a university to continue research into combustion in the United States, or in a national lab or industry.” For now, he is very happy to be at Princeton University, and we are fortunate to have this talented young man here…blowing stuff up in the lab. 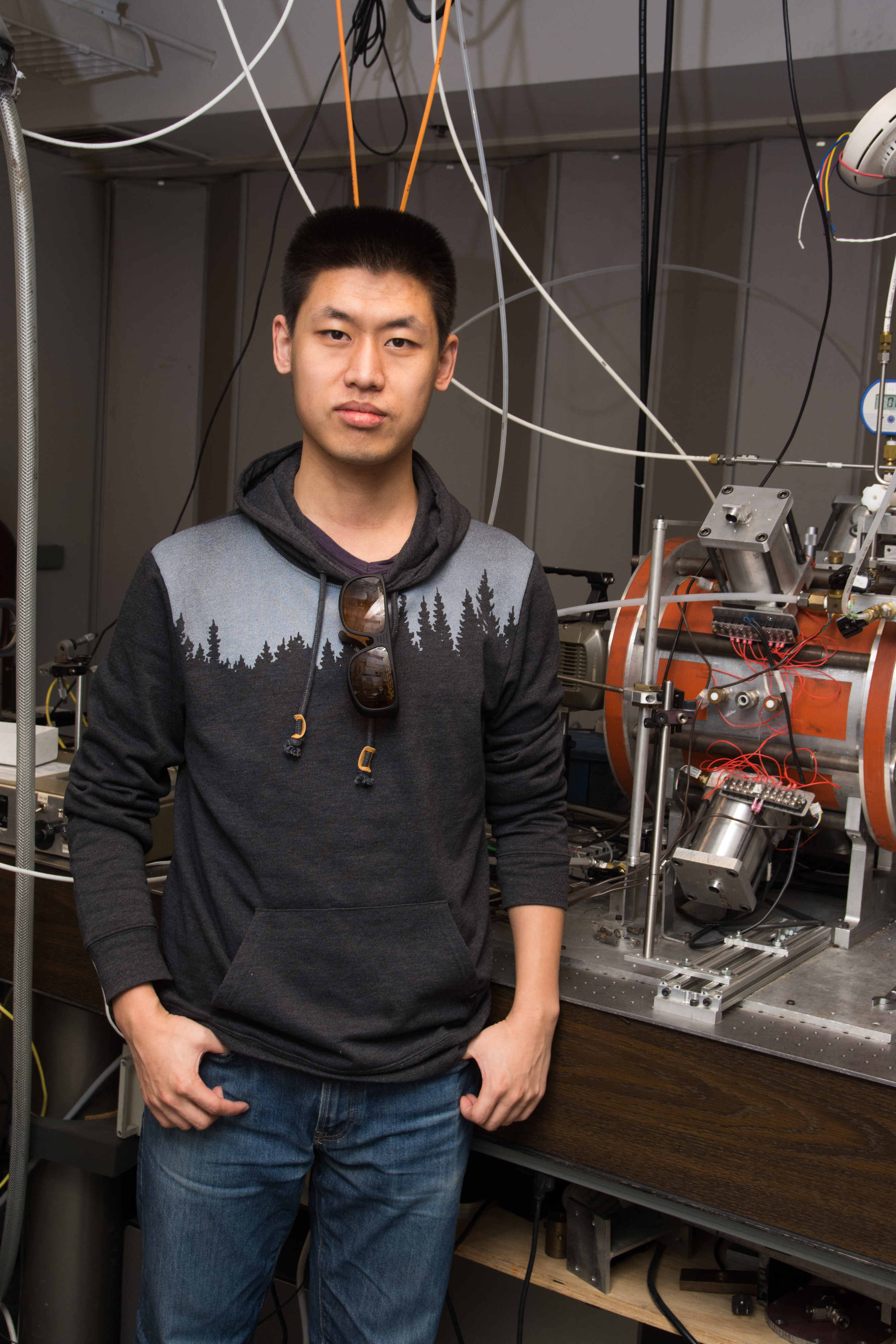