Whitney Huang will never forget the best speech she ever heard. As part of the Silicon Valley TigerTrek, a group of 20 Princeton students had the rare opportunity to meet with industry legends at tech giants and start-ups like Instagram and Airbnb.

One afternoon they drove off the beaten path, up a remote mountain to meet with Keller Rinaudo, the founder of Zipline—a delivery service that uses small robotic airplanes to provide life-saving medical equipment to people in need. He told the students if you have knowledge and power you should use it to create something beneficial and transformative for the world.

“I thought he was the most amazing human being I had ever met,” recalls Whitney, a junior in Mechanical and Aerospace Engineering working on certificates in Robotics and Intelligent Systems and Applications of Computing. “The trip reaffirmed and motivated me to pursue my passions instead of following more traditional routes in industry, consulting, or finance.”

Like Mr. Keller, when Whitney sees a problem her mind immediately starts thinking about a robotic solution. Even at dinnertime, when she should be off-duty, Whitney can be found having long discussions with the dining hall chefs about creative ways the extra food could be delivered to homeless shelters and soup kitchens. Someday, she dreams, those solutions could be replicated on a larger scale to provide food for those in need all over the globe.

“There is enough food in the world, but it is unevenly distributed. We need to find ways to bring excess food to the people who need it most,” says Whitney. “My life goal is to create robots that serve humanity by answering a problem like this—it might be by collaborating with humans or supplementing humans to help them perform better.”

Robotics, she says, is the perfect avenue to develop solutions that help people because it is versatile and has applications across many fields from medicine to the arts. “You can program a robot to do anything or go anywhere,” she says. “As robotic technology advances, they can be used to supplement abilities and tasks that humans need help with or are not particularly good at. For example, as someone who enjoys cooking, I have been thinking a lot about how robots could help prepare meals for busy families or assist chefs in restaurants.”

Before Whitney came to Princeton she had never even touched a robot. Today, as the President of Princeton’s Rocketry, Robotics, and 3D Printing Clubs, Whitney has served as a team leader for several competitions. For example, they built a specialized science vehicle that was deployed by a rocket for CanSat, and an autonomous maze-solving robot for the IEEE Brown Robotics Olympiad.

“The wonderful thing about Princeton is that it does not matter if you had the same opportunities as everyone else coming in—you can build your own opportunities when you get here,” says Whitney. “Every time I build a new robot, I feel like I am getting closer to creating new life. It is an incredible feeling.”

She also enjoys the peer interaction. “I love being inspired by my extremely intelligent peers every day. These clubs are a great practical supplement to the theoretical classroom setting and foster a supportive and inclusive environment for anyone of all experience levels to get involved in hands-on projects,” she says.

Whitney’s favorite project was a fully functional remote-controlled underwater robot she designed as part of research project with Naomi Leonard, PhD, Edwin S. Wilsey Professor of Mechanical and Aerospace Engineering at Princeton. The robot she designed and built from scratch has since been used to solve multi-agent dynamic problems, such as how schools of fish interact and swim together.

“It was especially challenging building an underwater robot because every time the battery touched the water it would cause a short. We ended up using acrylic tubes and aluminum flanges with a plug to create an airtight seal,” she explains. “Once we fried the robot because we forgot to plug the seal in before throwing it in the tank! We never made that mistake again.”

As a recipient of the Streicker International Fellowship Fund, Whitney also had an opportunity to spend a summer building robots overseas at Seoul National University’s BioRobotics Lab in South Korea. Whitney worked on a modular soft robot called SoBL, which she describes as “squishy balloon-like LEGOs that move in certain directions as you inflate them.” She designed and built a modular bending angle sensor for the robot, which gives feedback to the robot and allows it to be controlled.

Whitney says the atmosphere was different than the U.S. “My coworkers may come to the lab a bit later, around 10am, but they will often work until 8pm, or as late as midnight,” she describes. “Work life is also your social life—after work, you all eat dinner together, hang out, and sing karaoke.”

With every robot design, Whitney not only thinks about her ultimate goal to help humanity but also how to integrate her passion for the arts.

Before she fell in love with engineering, Whitney dreamed of becoming an architect. One of her favorite classes at Princeton was Transformations in Engineering and the Arts, which featured the many ways engineering and the arts can be integrated to make something beautiful.

“The idea of constructing something beautiful was always at the forefront of my mind. If you think about engineering products, people like to use things that are not just practical, but attractive too. It is not just about the product itself but also about the design and user experience,” she says.

For her final project, Whitney created a large acrylic LED display map of campus that aggregated data on WiFi usage. The map lit up various colors and sizes in different sections of the map based on that data, creating a heat map of student activity over a 24-hour span.

When Whitney thinks about the future, she often reflects back on the Silicon Valley TigerTrek for inspiration. Someday, at her own startup company, she plans to make something that is both beneficial and beautiful. 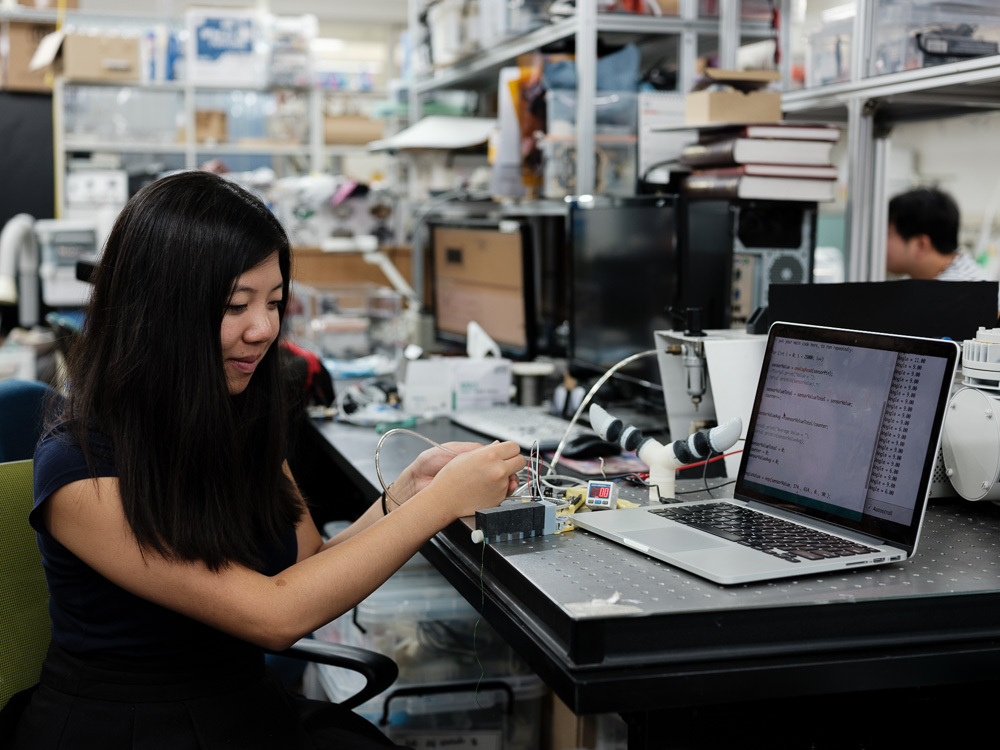