Not all engineers grow up building with Legos and assembling model airplanes. Some play with Barbie dolls and pretend to be astronauts living in outer space.

“A lot of young people, particularly women, are skeptical about going into engineering because they associate it with only one thing: building. But engineering can be so much more—it means questioning, theorizing, calculating, creating, and testing” says Katherine Kokmanian, a third-year PhD student in Mechanical & Aerospace Engineering (MAE) at Princeton.

Katherine’s grandfather was a mechanical engineer so the career has long been in the back of her mind. But as a young student she often felt discouraged from the field because people told her all engineers were mechanics.

“It surprised a few people when I informed them that I was applying to engineering school because I was never particularly skillful with my hands. I loved math and physics, and I had a curious mind, so I decided to give it a try. Luckily, it worked out and I soon realized that there is room for all types of people in engineering,” she says.

Now, in return, Katherine is trying to inspire a new generation of students about opportunities in the field. Last year, as part of an outreach course, she organized science projects for an elementary school. Her goal was for the students to understand that engineers are involved in all walks of life from medicine and aerospace to agriculture and education.

The one thing all engineers likely have in common, however, is curiosity. Growing up in Montreal, surrounded by a booming aerospace industry, Katherine was enamored with space travel and astronauts. She found pleasure in understanding how everything around her worked from a complex rocket ship launch or the transmission of a car to a simple thermometer.

“Before college, I traveled to Europe with a friend. Everywhere we went I kept asking, ‘I wonder how this is made, or let’s think about how this works...’ She would always laugh and wonder why it mattered so much to me,” says Katherine.

At Concordia University in Montreal, Katherine was part of a co-operative education program that allowed her to participate in three different mechanical engineering internship programs during her bachelor’s degree. These opportunities provided her valuable industry experience in several fields of mechanical engineering.

Katherine’s first two assignments gave her a window into the aerospace industry where she worked in both structural mechanics and fluid mechanics. Her final internship at MTU Aero Engines in Munich was the perfect opportunity to combine her passion for engineering with her love of travel and languages—she speaks English, French, Spanish, and Armenian, and is in the process of learning German. Katherine hopes to return to Munich in the near future to pursue her engineering career.

Katherine’s interest in fluid dynamics and aerodynamics became clear after working on a senior project to design the aerodynamic components of a student-built vehicle that competed in the Formula SAE competition. She was responsible for validating the team’s designs by performing computational fluid dynamics on the racecar. Once the designs were finalized, Katherine and her teammates manufactured both front and rear wings, as well as the diffuser, all of which were made with carbon fiber.

“What I enjoyed most about fluid mechanics was that I could use it to explain all those questions I always had—how do fish swim, how do airplanes fly, how do turbines work?” says Katherine. “Of course, now that I am in fluid mechanics, my family enjoys asking me to explain everyday occurrences which are related to fluid mechanics. If we sit down to have coffee, suddenly I’m explaining what happens when you stir in the milk with a spoon.”

Katherine’s well-rounded approach to engineering has been an asset at Princeton. “My first visit left such a lasting impression on me that I knew I had to return one day. I was held captive by the architecture and spent hours walking around campus. I loved how all the shops on Main Street had photos of Albert Einstein hung on the walls. I could see how Princeton fostered an environment that brings out the very best in people,” she describes.

The coursework also resonated with Katherine. In her first class with Marcus Hultmark, PhD, Assistant Professor of MAE, who later became her advisor, the students were assigned to collect photos of turbulence in action. “Immediately, I felt like I was working with people like me. The assignment was what I had always done naturally in life for fun,” she says.

With the majority of her graduate courses complete, Katherine now spends most of her time in the Fluid Mechanics Transport Phenomena Group. Her work focuses on supersonic flows, which, as the name suggests, travel faster than the speed of sound. Supersonic speeds are categorized using a non-dimensional number called the Mach number—any flow above Mach 1 means the flow is in supersonic territory.

Commercial planes do not fly at supersonic speeds, however they may have localized regions of supersonic flows, explains Katherine. As a result, the biggest application for her research is in rockets and supersonic jets that achieve very high Mach numbers.

Katherine is developing nanoscale sensors that can measure the velocity and turbulence of these supersonic flows. Her work builds on a sensor that was created by Alexander J. Smits, PhD, Eugene Higgins Professor in MAE, and his group a few years ago.

“Velocity measurements are important because they can tell you how much drag you have on an airplane. There are some measurements that already exist for supersonic flows, but they are not highly resolved statistics,” says Katherine. “The goal of these sensors is to provide more accurate measurements of what to expect when something is flying at supersonic speeds.”

“Katherine’s research is extremely complicated and quite different from most of the projects in our lab, which means she has to figure out a lot of problems on her own,” says Professor Hultmark. “She’s not afraid to ask questions and has been reaching out to scientists all over the world to find solutions. She is driven, disciplined, and doesn’t give up until she finds an answer.”

Most of her days are spent in Princeton’s clean room trying to manufacture these tiny sensors alongside very hands-on electrical engineers. Katherine then tests the designs in a Mach 3 wind tunnel.

“Everything has to be completely sterile—you can’t eat or drink. We try not to go to the bathroom because it is such a pain to take off our suits. Days turn into nights, your mouth gets very dry, and suddenly you realize you haven’t seen the sun all day. But hey, that is grad school!,” she says.

The irony of ending up in a hands-on experimental lab isn’t lost on Katherine. But as she likes to tell those elementary school students, you never know what you will end up enjoying or being good at unless you give things a try. 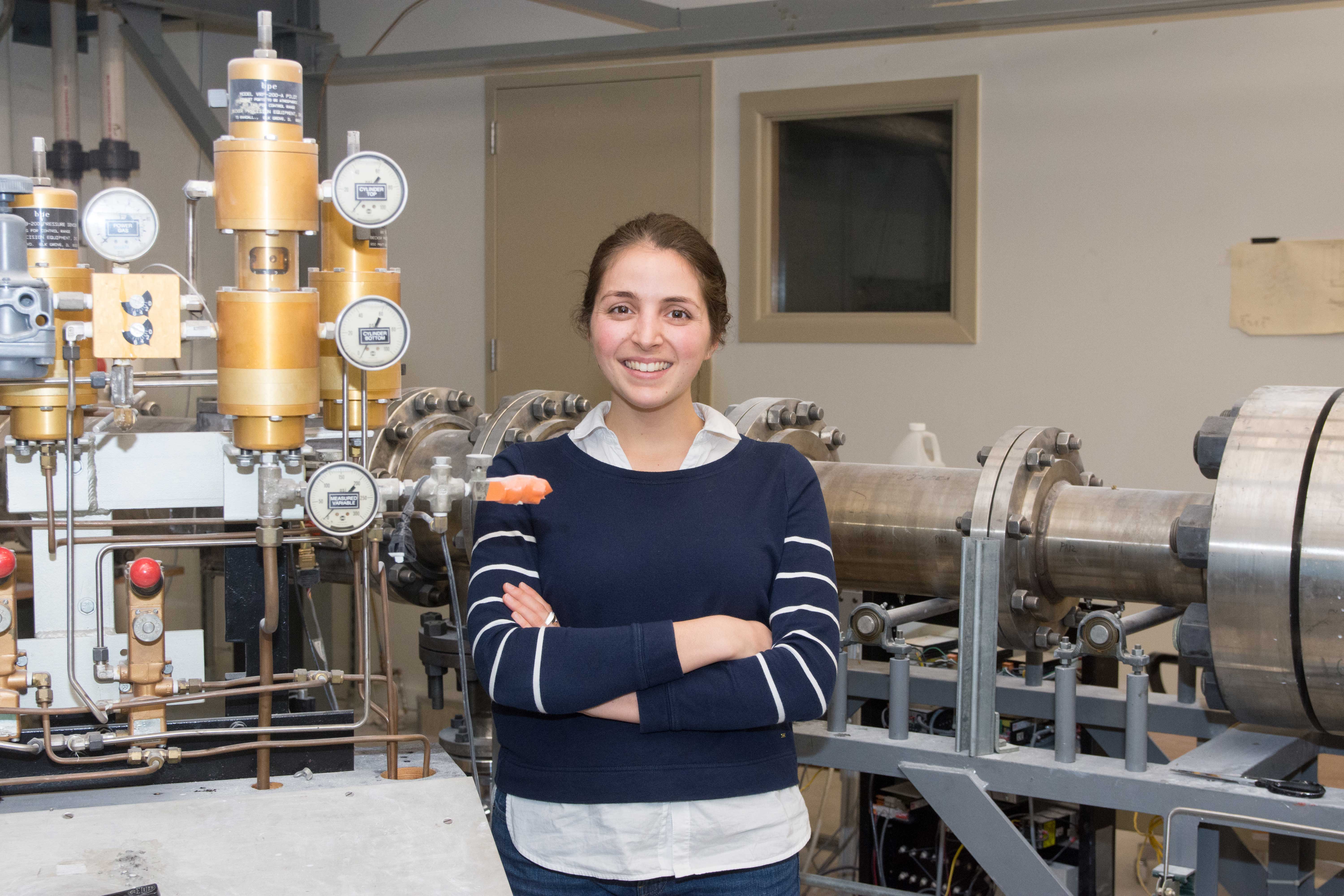