Long before plasma television screens entertained viewers across the country and computers became a must-have tool for workers in nearly every field, engineers toiled. They developed techniques to print ever-smaller lines to build ever-smaller circuit boards, which allowed the size of computers to shrink from the size of a room to the size of a placemat. Today, Princeton MAE graduate student Emre Turkoz is part of a team dedicated to answering fundamental questions about how jets of complex fluids break into tiny droplets to form tiny lines and create even tinier circuit boards—which will ultimately enable the development of even tinier electronics.

Emre’s dissertation is focused around the idea of converting lab techniques for printing complex materials into real-world manufacturing processes. He’s part of a team exploring what happens when a droplet of a complex material is formed, which is a process that happens in fewer than 10 microseconds. To understand this process, they’re exploring the fundamental questions of how this material behaves when it’s printed—which is a continuation of what motivated Emre to pursue engineering as a child.

Emre’s interest in mechanical engineering began at home. His father, a self-taught IT developer, brought home science magazines for Emre to read. He brought Emre to watch cars race and to take a peek under the hood. And with this early curiosity, Emre grew increasingly more interested in understanding the fundamental questions of how the physical world works.

“When I walk into a room and see simple things like chairs and tables, I’m interested in how they act under different forces and stresses. When I’m flying, I’m worrying if the people in charge of the plane all knew what they were doing. And as I’ve learned more about physics, I can now ask more questions,” he explains.

After studying mechanical engineering as an undergraduate in Turkey, a love of computational modeling and challenging problems led him to pursue a master’s degree in plasma physics. The models he developed and code he wrote as part of his master’s helped him land an internship with the Princeton Plasma Physics Lab. Soon thereafter, a budding interest in the closely-related field of fluid dynamics led him to apply to the MAE PhD program.

At the time of writing, Emre was in his 82nd week as a student in Professor Craig Arnold’s group, which is focused on laser-processing and transport of complex materials. Professor Arnold knows this because Emre has tracked his weekly progress during the team’s weekly standup meetings since he joined the group. Although all participating students and faculty members use these meetings as an opportunity to share the research they’ve done over the previous week, Emre is among the few to also use the weekly presentation as a way to track his progress toward completing his doctoral program.

“Emre sets targets and works toward them,” says Professor Arnold. “From the day he joined our group, he has worked incredibly hard to move our research forward. Not only did he learn our experimental setup so that he could start shooting materials quickly, he did so while preparing for his general exam—and while helping us solve a complicated problem with our simulation software.”

“Emre is unique in his willingness to work through difficult problems undeterred. He never gives up, and if he gets stuck he reaches out for help,” said Professor Arnold.

Why Study Fluid Dynamics? Emre’s Research and its Applications

A current fourth year doctoral student, Emre credits Professor Howard Stone’s fluid dynamics class for igniting his passion for his field. Not only did Professor Stone inspire him to want to become a professor, but he also taught Emre a new way of explaining complex scientific concepts by connecting them to easy-to-understand real world applications. Now, that’s precisely how Emre describes his work with different classes of fluids.

“When you pour ketchup on your fries, it stays in there. That’s a big contrast with water, which would spread all over your plate. But when you eat ketchup, it doesn’t feel like you’re chewing gum. Instead, it feels very smooth. That’s because the viscosity of the ketchup is reduced when you apply stress to it.”

This property puts ketchup among the so-called viscoelastic fluids, which is the first class of fluid that Emre and his team in the Arnold Group researched. While the team waits for a paper showcasing their work to be reviewed, they have moved on to explore a second class of materials: pastes and gels. Specifically, Emre is exploring the process of printing a silver paste that’s used in the fabrication of solar cells and other small electronics using a nozzle-less printing technique.

In most commercial printing techniques, a needle sprays out drop after drop of a fluid. Eventually, the drops make a line. Once printed on a circuit board, that line carries information from point A to point B. Smaller and smaller needles have enabled manufacturers to create ever-smaller lines, but there are ultimately lower limits to the size of a drop that a needle can produce.

For this reason, Princeton researchers have spent close to twenty years exploring laser-printing techniques, including nozzle-less printing techniques to print even smaller lines. Instead of shooting drops out of a nozzle, researchers spread a material over a piece of glass, flip it, and shoot a laser from the top to create a jet of the material. The line that gets ejected is narrower than a nozzle-based printing technique would allow.

Eventually, this technique will be used with an array of fluids to print tiny lines for a variety of applications. It could be used to create circuit boards so small that they’re almost invisible, which would enable computers to hold more information. It could be used to create smaller pixels, which would allow the development of screens and displays with extremely high resolution. But before it can be used to accomplish any of these goals, Emre and his team must predict the ideal printing conditions. 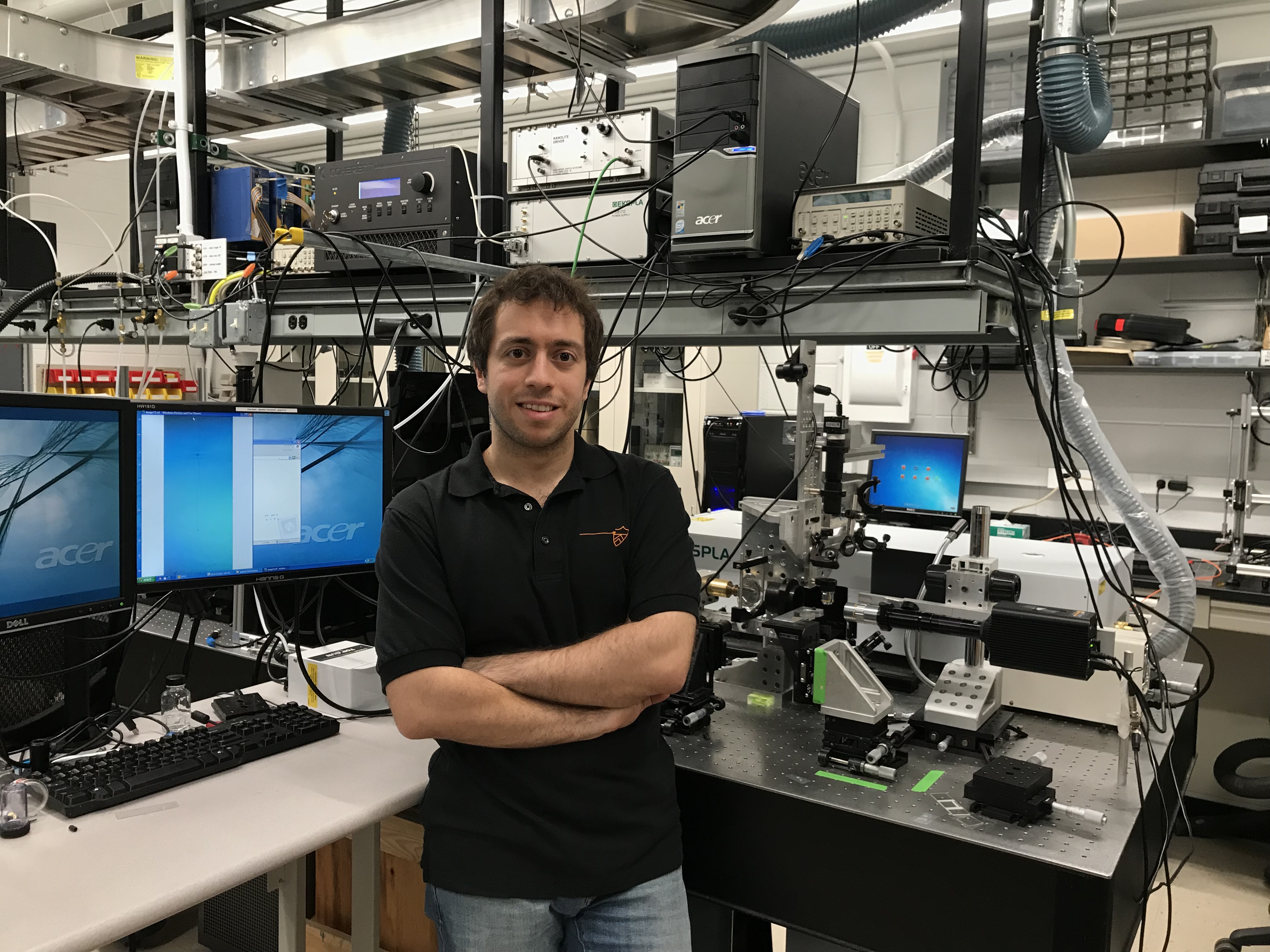