When Grace Lynch and Soumya Sudhakar sat next to each other in Thermodynamics sophomore year they had no idea it would be the start of both a prolific partnership and a meaningful friendship.  After class, they started talking and quickly realized how much they had in common. The undergrads, who are now both seniors at Princeton, had become mechanical engineers for the same reason: to solve problems and build things that moved, preferably as fast as possible.

From that first conversation sparked a collaboration that has been a fixture throughout their college years. What began as friends working on highly defined problem sets in the library later evolved into dynamic lab partners formulating their own designs. Today, the duo is tackling independent work in robotic control systems for their senior thesis project.

“Our partnership, each and every step of the way, has showed me how important teamwork is in engineering. When one team member gets stuck on a problem, the other can help them go back to the basics, retrace steps, and see the bigger picture,” explains Soumya.

Grace and Soumya’s interest in control theory began junior year when they took an MAE elective together and later started an independent work project together. After semesters of lectures and fixed labs, it was the first time they had to find a solution for an open-ended problem. For the final project, they had to find a way to make a small model helicopter achieve a hover position.

“What I loved instantly about controls is that, even though it is a very mathematical field, it has immediate applications to real life,” explains Grace. “We were able to take all these beautiful theories we learned in class and use them to make a machine do something we wanted it to do.”

After weeks of manipulating algorithms and tinkering with hardware, they finally succeeded in making the helicopter simulator hover. The lab mates recall cheering in the middle of the quiet laboratory.

Grace and Soumya enjoyed the project so much that it inspired them to pursue control applications in drones for their senior thesis. There is a great need to advance robotic technology that can be used in unmanned aerial vehicles (UAVs). Since UAVs can travel without a pilot for large distances and at fast speeds, they are an ideal way to survey large areas after a natural disaster or for the purpose of environmental monitoring. Even Amazon has started a drone project, Prime Air, which may one day deliver packages.

While UAVs have a wide range of applications, safety is a serious hurdle to their usability. “There are a lot of exciting robotic solutions in the lab but we aren’t seeing widespread adoption. Safety is a major concern,” explains Soumya, who worked on a project that used a drone to help a cranberry farmer identify fungus rings on his plants. “As drones become more widely available in commercial applications they need to be able to navigate around unavoidable obstacles, such as trees, buildings, and even people.”

The goal of Grace and Soumya’s project is to gain insight into how to help drones avoid these obstacles. To help ensure UAV safety, they are implementing what is known as a propeller-hang or “prop-hang” on an existing fixed-wing UAV model airplane that would allow it to turn when it detects an unavoidable obstacle using an onboard sensing system. During a prop-hang, the UAV would turn from its body axis flying parallel to the ground to flying perpendicular to the ground. As a result, the UAV mimics a rotorcraft and can achieve a hover.

Once they achieve a proper hover, they plan to take the project a step further by designing the controls to be fully onboard. Previous research has successfully implemented an autonomous prop-hang procedure using off-board sensing and computation. However, for drones to be most useful and maneuver in a wider-range of environments, they need to operate using only onboard sensing and computation. This means the UAV would be able to sense its own position and velocity in space.

“Being able to perform this kind of maneuver could be very important in ensuring the safety of such UAV systems, especially as they begin to be deployed in very cluttered environments (e.g., urban environments) or potentially even in close proximity to humans,” says Anirudha Majumdar, PhD, Assistant Professor in MAE, who is co-advising the project with Clancy Rowley, PhD, Professor in MAE. “Transitioning to propeller hang mode essentially allows the UAV to slam on the brakes if there is an obstacle in front of it that it cannot maneuver around. This can thus act as a failsafe if the environment that the UAV is operating in is too cluttered or if an unexpected obstacle appears in front of it.”

Some of their insights have come from scouring online hobbyist message boards. “What we are doing to the model airplane is like hacking. It isn’t about finding the perfect math model. We are taking hardware designed for another purpose and trying to make it do something different,” explains Grace.

Spending long hours and late nights in the lab is a sure-fire way to bond with someone. When they aren’t discussing the ethical implications of robotics research, the engineers will grab a bite to eat or go running together.

“It got to the point last semester where someone would ask me about my weekend and I would say, ‘We had a great time,’” Grace jokes.

Next year, however, the research partners will veer on different paths. Grace is pursuing a job in the aerospace industry and Soumya is headed to graduate school for controls. As for their next adventure together, one is already on the books for 2035.

A year ago, they were enamored by a story about an Irish scientist who discovered a way to describe orientations in space on a bridge in Dublin. The teammates decided they would celebrate their 20th anniversary of friendship with a family vacation to that same spot. By then, between the two of them, there will undoubtedly be many more successful experiments to celebrate. 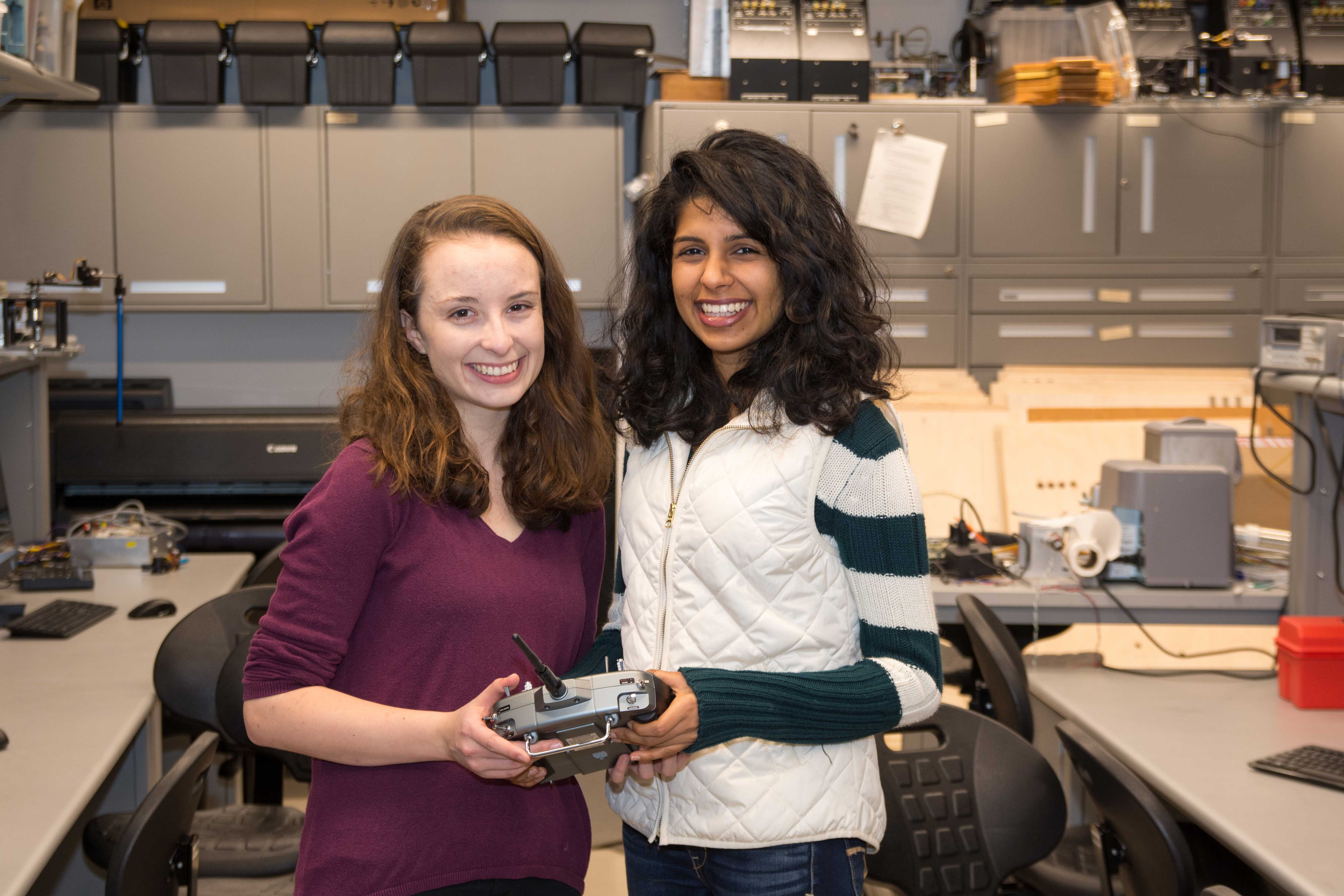