It’s no wonder that Mark Miller is a mechanical engineer. Both his father and grandfather were engineers, and when Mark was a boy growing up in a small town in Kentucky, there were always tinkering projects going on around the house. “I remember talking to one of my friends and he told me, ‘We had to call a guy to come to our house to fix our air conditioner.’ And I said, ‘Wait, there are actually people who come out and do that?’ I didn’t consider at the time that maybe it was unusual for my dad to be able to fix an appliance like that.” Now, as a PhD student in the Department of Mechanical and Aerospace Engineering, Mark is conducting experiments on wind turbine aerodynamics using a model scaled to fit into the confines of a laboratory facility.

Mark began his undergraduate studies at the University of Kentucky, where he initially was interested in automobiles. This interest led him to become part of the Kentucky Solar Car Team, first as a crew member and later as the team manager. The team, which was completely student run, built a single-seater car from scratch that had a top speed of 65 miles per hour and was composed of about 9 square meters of solar panel. “We designed the vehicle and did the machining and carbon fiber lay up. We even did the fundraising,” Mark said. The cars ran well in the races that he participated in, including the Formula Sun Grand Prix, which took place on the infield track of the Indianapolis Motor Speedway.

However, it was a fluid mechanics class that steered Mark in another direction. One of the labs had a large wind tunnel that caught his eye, so he asked his fluids professor if he could work there. “He hired me part-time during the summer and during the school year as an undergraduate research assistant. It was a good hands-on introduction to fluid mechanics and how to run experiments.”

Mark continued to work in the fluid mechanics lab at the University of Kentucky while he pursued his master’s degree. During that period, he did a research fellowship with NASA studying the effects of roughness and blowing on turbulent structures as it relates to heat shields for reentry vehicles. “The fellowship included a research rotation in Houston at the Johnson Space Center.” he said. “I had the opportunity to work with the NASA engineers who designed the heat shields. It was a great way to cap off the lab experiments.”

While making the conference rounds in connection with his NASA research, Mark meet his current advisor, Marcus Hultmark, PhD. Mark had been considering the possibility of getting his doctorate, and as a result of this networking, it was decided that attending Princeton and working in Professor Hultmark’s laboratory would be a good fit.

Wind turbines are not as common in New Jersey as they are in the western part of the country, but that may change in the coming years, Mark pointed out. “It’s an exploding market because the price per amount of energy you make with wind turbines has dropped dramatically over the past 10 or 15 years—so much so that in some states wind energy is cost-competitive with natural gas.”

Some of the newest wind turbines are as big as two football fields in diameter. Because of their size, it can be difficult to study them with accuracy, Mark explained. To solve that problem, he and his colleagues developed a scaled-down model that can match the aerodynamics of full-size wind turbines. That feat is achieved by using a specialized wind tunnel that can be pressurized to increase the density of the air inside over 200 times that of air at atmospheric pressure.

“With our tunnel, in addition to changing the velocity of the air, you can also compress the air that goes into it, making it closer to the density of water than air,” Mark said. The lab where these experiments are conducted is located at Forrestal Campus, about three miles from Princeton’s main campus. “This unique facility has a pressurization capability that allows us to look at the aerodynamics of wind turbines on a small, controlled scale.”

“Mark is working on a very unique project where he can investigate the aerodynamics of large wind turbines in unprecedented detail,” Professor Hultmark said. “He essentially designed and built the setup on his own. He is a fantastic engineer. His project is the central part of a larger project in my lab, but he has also become the spider in the web who is involved and helping out with all aspects.”

Mark is on track to earn his PhD by the summer of 2018, after which he is considering staying on for a while to do postdoctoral research. “Our experiments are getting to the point where we’re producing really useful information about the structure of the flow around the turbines,” he said. “Beyond that, I’m not set on which direction to go next. Up until now, I have kept myself open to opportunities and so far, that has seemed to work out well.” 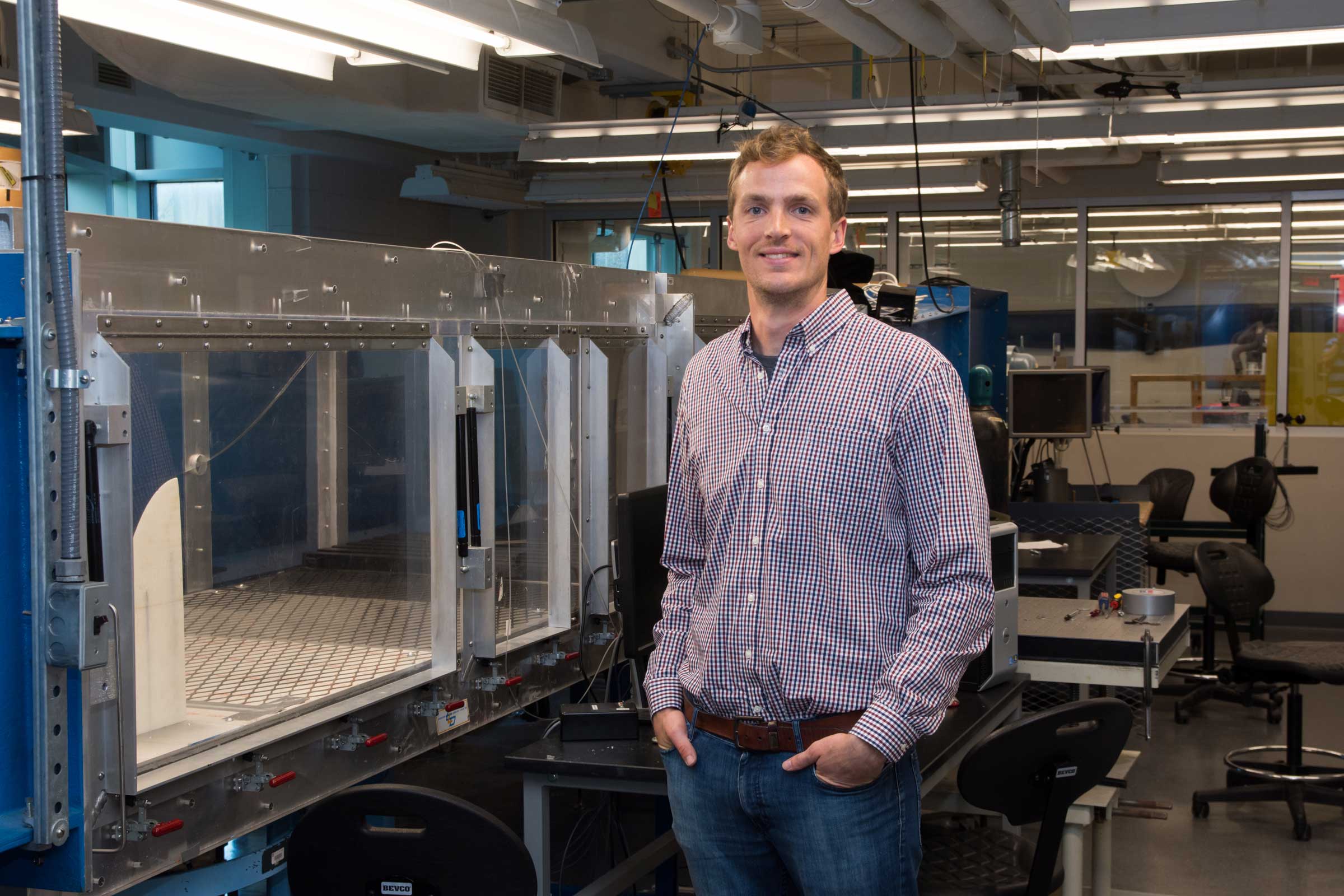