Back to Basics: Pierre-Yves Taunay

Pierre-Yves has always wanted to know what goes on behind the scenes. As a child working on his uncle’s farm in a remote part of France, he would take apart and rebuild old equipment just to see how the wiring worked. When his cousins came over, they would look through their grandfather’s World War II books and re-sketch designs of fighter planes to figure out what made them fly. Even today, in the kitchen, he enjoys tinkering around with new recipes for bread, wondering what would happen if he substituted in a different type of flour or ingredient.

The world is full of machines, formulas, and principles to explore. And for Pierre-Yves, no wonder has ever been more intriguing than what was right above him: space.

“There is this French show that is similar to Bill Nye the Science Guy—C’est pas sorcier. My favorite episodes were always about the universe. I had this extensive sticker collection of the planets and pictures from probes like Voyager, which studied Jupiter and Saturn. I would gaze up at the stars and be in awe that it was all really up there,” he says.

Today, when Pierre-Yves looks up at the sky, he thinks about how we can get there faster and stay there longer. As a third year PhD student in the Mechanical & Aerospace Engineering Department at Princeton, Pierre-Yves is conducting basic research that is needed to develop the next generation of electric propulsion technology.

“The easiest way to convey the importance of basic research is to think of the construction of a house: a solid foundation is the key to having a safe and long-lasting structure. The same is true for scientific research. Through my work, I look for ways to improve fundamental aspects of space propulsion to help advance the industry as a whole,” he says.

Pierre-Yves’s interest in electric propulsion began as a young engineering student.  While studying at the Ecole Centrale de Nantes in France, he had an opportunity to swap his final year with a two-year Master of Science in Aerospace Engineering program at Penn State University where he studied a miniature microwave ion thruster. After graduation, he worked at Penn State’s Institute of Cyberscience as a software engineer for two years before coming to Princeton.

In the Electric Propulsion and Plasma Dynamics Laboratory at Princeton, Pierre-Yves works with hollow cathodes, which are a critical part of space propulsion. Hollow cathodes provide electrons to ionize the propellant used by the thrusters; and in the case of ion thrusters, neutralize the exhaust ion beam. Says Pierre-Yves: “Without them, most plasma thrusters would not work. “

Pierre-Yves is trying to figure out how to extend the life of these hollow cathodes by working with some of the largest experimental designs in the field. Hollow cathodes of this size are essential for building the next generation of thrusters that could power a decade-long mission.

“The next generation of electric propulsion calls for powers that are 200 kW and up in magnitude, which is about one to two orders of magnitude more than what is currently commercially available,” he explains.

Inevitably, whenever you try to magnify a design that works well on a small scale, challenges ensue. Pierre-Yves’s first hurdle has been the durability of the materials. The exterior heater of the cathode, which allows it to start up, operates at an extremely high temperature of 2,500 degrees Fahrenheit.

“The original heater designs for the exterior heater material, such as tungsten wire, tantalum, and alumina did not work for us—they all become brittle and broke. Instead, we had to use graphite for our heater. Graphite brings its own sets of challenges, however, as it is difficult to find a material that can electrically interface with it at these temperatures without melting,” explains Pierre-Yves.

His team tried using a little-known heat-resistant stainless steel called RA 253 MA for the electrical connection to the heater. “We affectionately call it crazy steel,” Pierre-Yves jokes. “It took our team the better part of a day simply to cut it for the experiment. But it was worth it: RA 253 and graphite were the first materials that could handle the heat. So far, we have been able to draw 400 A of current for the cathode, which is in line with the requirements for the next generation of electric thrusters.”

In research and life, Pierre-Yves always remembers to get back to the basics. When time permits, he still enjoys gazing up at the moon, finding the rings of Saturn with a telescope, or watching a rocket launch fill the sky.

“My goal, in the next 30 years, is to see my findings contribute to a space venture that brings humans to Mars or robotic missions to the moons of Jupiter,” he says. Perhaps, one day Pierre-Yves will add a sticker from a mission he was a part of to his collection. 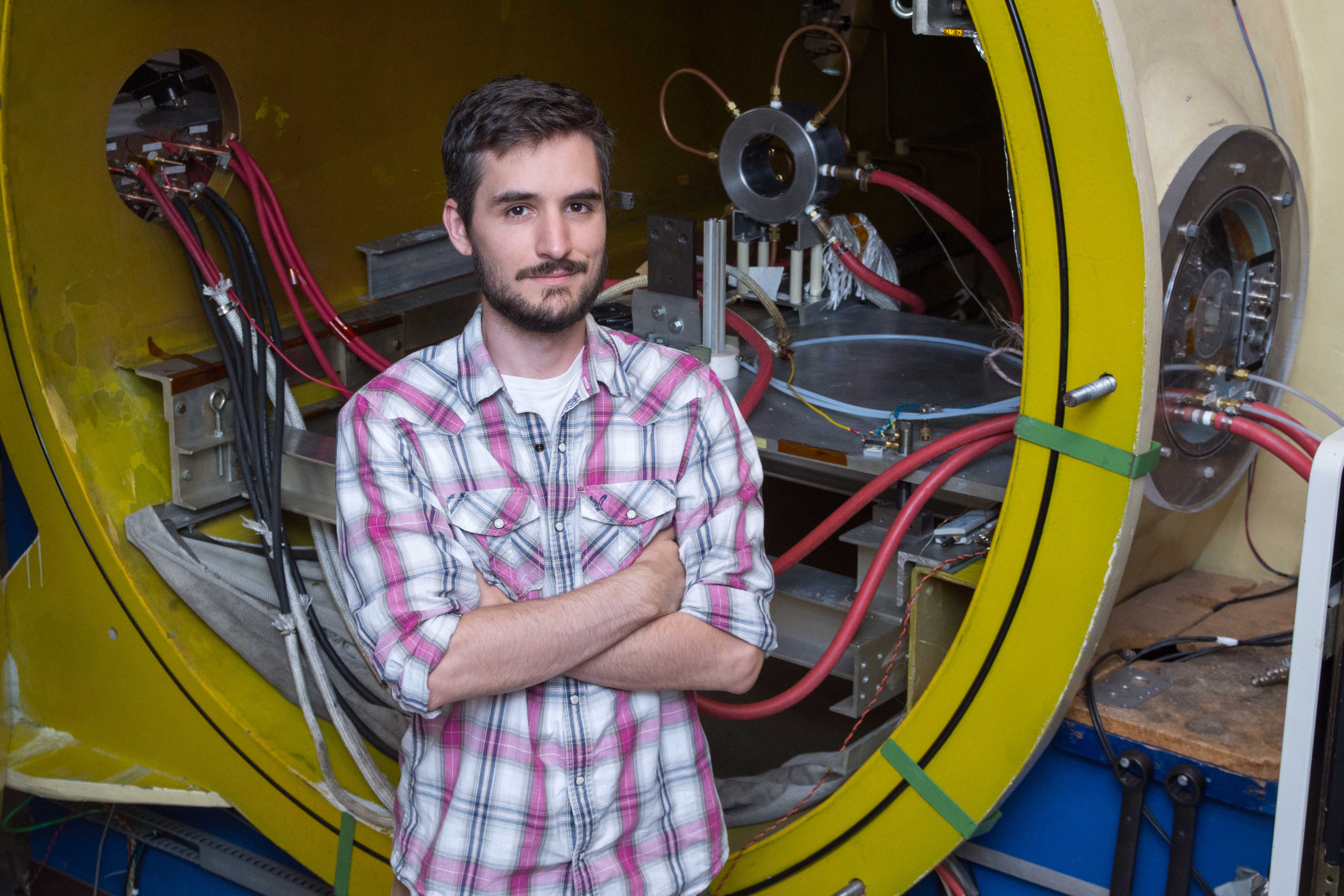