Lower Your Lap Bar And Raise Your Expectations

“It’s kind of fun to do the impossible.” Walt Disney’s famous words have been an inspiration to Larry Loprete ever since he rode his first Ferris wheel at the local carnival. While other kids giddily admired the scenery, Larry’s eyes were transfixed on the tires, rotating gears, and electric motors on the track.

When the car reached the top, his mother was concerned Larry was unhappy. “I am just trying to figure out how this thing works,” he said pointing out the gondola window at the belts driving the tires, explaining that these tires ride along the Ferris wheel's inner rim to move the ride.

From those first rides spun a lifelong passion for entertainment technology. As a child, Larry spent his free time playing build-your-own amusement park video games and sketching out designs for new rides, restaurants, and hotels. Like Walt Disney and his early models of Main Street Station and It’s a Small World, Larry hopes to one day bring his own dreams to life as a theme park ride designer or Imagineer at Disney.

“I want to build an attraction that has never been done before. I admire the risks Walt Disney took using his own life insurance to build something completely innovative like Disneyland,” says Larry who is a junior studying Mechanical & Aerospace Engineering at Princeton.

“What interests me most is how guests experience the rides and the way they work and move—from the track and set design to the mechanical layout, such as figuring out when it should turn, drop speed up, or slow down.”

The ride he most admires is Pirates of the Caribbean in Disneyland because it has elements people of all ages can enjoy. “When you’re younger, you might enjoy the characters and the colors, when you’re a teenager, you probably like the drop and getting wet, and when you’re older, you may admire the detailed craftsmanship and the staging,” he says.

When Larry rides, the gears in his mind are typically focused on one thing: how they pull it off. Take, for example, the special effects needed to create fire. Since the attraction first opened 50 years ago, pieces of tarp blown by fans that are illuminated by red and yellow lights have created the fire effect. Says Larry: “I admire the ingenuity and cleverness of such a basic effect that works so perfectly.”

From his first model train track sets and marble towers, Larry has always been interested in understanding how things work and move. This summer, he is interning part-time at Rides4U, a company that sells new and used carnival rides. He manages inventory and corresponds with clients looking for new additions to their amusement parks.

Larry is also involved in several 3-D printing projects with Michael Littman, PhD, Professor of Mechanical & Aerospace Engineering, which will help expand his knowledge of ride design. In particular, he is creating a tutorial to teach beginners how to model a small nameplate in Creo and then utilize the dual extruder to print it with two different colors. Creo is a computer program that is similar to the ones used by Walt Disney Imagineering to design rides.

“Today, we can simulate every motion and effect on the computer so most of the idea is fleshed out before it is physically in front of us,” explains Larry. “It is amazing to be able to take a concept from your mind, design and perform structural analysis on the computer, and then print out a physical model to show people. When Walt Disney presented Disneyland, he had to use giant handmade models to map out every storefront on Main Street.”

Larry plans to explore computer design and controls more next year as part of his elective courses. Earlier this year, he was selected by Princeton as a strong candidate for a postgraduate fellowship based on his freshman year grades.

“Larry is very enthusiastic about engineering and his interests. He likes old mechanical things like wind-up phonographs.  We share an interest in mechanical musical devices like player pianos, phonographs, and music boxes. Larry has a commitment to quality—he is very persistent and pays attention to detail,” says Professor Littman, his advisor.

Like Professor Littman, Larry also shares a love of antique technologies and restoration projects. As part of his favorite course, Engineering Projects In Community Service (EPICS), which performs science education outreach to middle and high school students, Larry led the endeavor to find, purchase, and restore a Williams 1976 Space Odyssey pinball machine. Over the last six months, Larry has diagnosed scoring issues, repaired the credit wheel, and rebuilt the chime box and plunger.

Larry plans to use it as a display for EPICS projects and make demonstration models for young students that show how different parts of the machine work.

“Take solenoids, for example,” he says. “The concept sounds super lame—you put electricity through a coil and metal is pulled into or out of it. But when you see solenoids through the eyes of a pinball game—flippers flipping, pop bumpers firing, and eject holes kicking—kids say ‘wow, solenoids are cool!’”

Whenever his family would go on vacation, Larry would always try to find an arcade with pinball. On the weekends, Larry still looks for his favorite FunHouse machines and tries to rack up some high scores. Two summers ago, he saved up all the tip money from his job at Dunkin Donuts to buy his first pinball machine. “I would love to own a FunHouse someday, but it would cost about six grand,” he jokes. “I would need a bit more tip money.”

An entertainer at heart, Larry enjoys eliciting laughter from those around him. At Princeton, he is part of the Lobster Club Improvisational Comedy Group and the Acapellago A Capella Singing Group. Says Larry: “It is just part of my personality – I have fun when other people have fun. I like to tell jokes, play pranks, and just generally make people laugh.”

Larry’s best prank was in his freshman advising group’s online chat. Students would use the forum to make dinner plans, ask to borrow items, or share funny stories. For several months, Larry decided to speak only by copying and pasting messages that had already been sent to the entire group.

“I had a cheat sheet I carried around in my pocket,” he explains. “After a few months, I tried to be more obvious, but no one caught on. When I told them, everyone had a good laugh. It was the craziest thing I have done at Princeton so far.”

Someday, Larry hopes people will be sharing a laugh or a smile on his designs. One of his favorite sketches is a small restaurant where every table is on its own private island that is accessed by a gondola. So keep a lookout on your next Disney vacation, you never know when you might be riding in an attraction or dining al fresco in a restaurant designed by Larry. 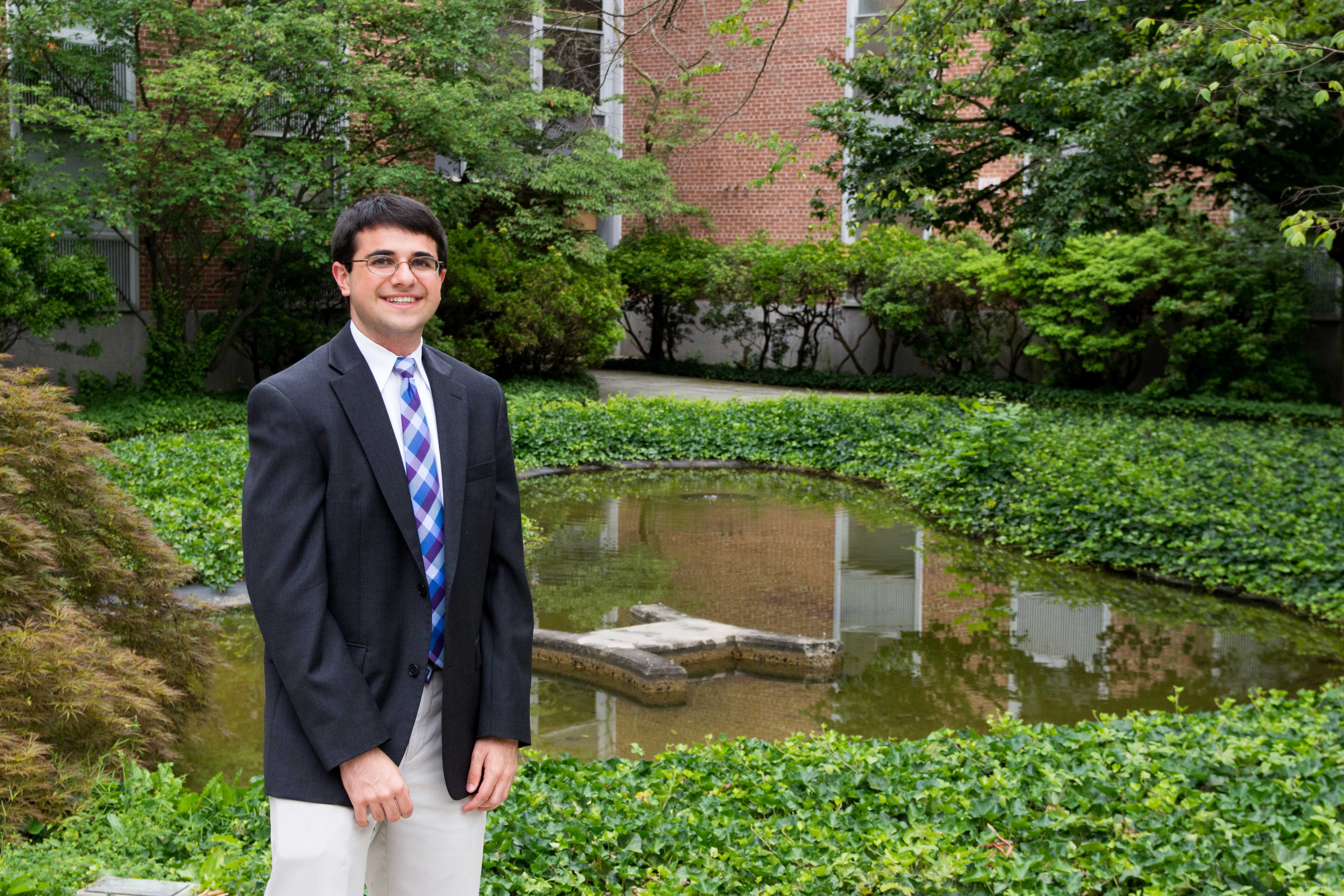