Will Coogan: From Composer to Physicist

Six years ago, if you told Will Coogan, *18, he was going to become a rocket scientist he would have laughed. Back then, he was finishing a second master’s degree in music at Jacobs School of Music and spent his days composing pieces for electronics and orchestra.

Then, he read the Foundation trilogy by Isaac Asimov, a futuristic science fiction series about humans who have long left Earth behind and travel throughout their Galactic Empire. He quit music, applied to a physics program, and decided to devote his life to making interplanetary travel a reality.

“The trilogy completely changed my outlook on life. When I realized what a tiny speck we all are in this vast universe, I felt claustrophobic on behalf of our species,” says Will. “As the book suggests, at some point, the Earth will not be here anymore, so it is essential that we find a way to become an interplanetary species.”

To pay for the extra schooling, Will started his own carpentry business. As a teenager, he learned the trade working alongside painters and woodworkers for extra cash. With the support of his loving wife, an accomplished flutist, he spent the next two years bouncing back and forth from physics classes to odd jobs building decks or remodeling bathrooms and kitchens.

“Cost is our largest hurdle in getting to other planets,” he says. “Politicians are not going to spend more money on NASA, and I don’t have enough money to make a difference, so finding a way to create technologies that make space travel more affordable seemed like the best way I could contribute.”

Today, Will is a PhD candidate in Mechanical and Aerospace Engineering (MAE) at Princeton and works in the Electric Propulsion and Plasma Dynamics Laboratory. While chemical rockets have been successful in getting spacecraft off the ground, scientists need to develop more efficient methods to get to other planets. Will believes the answer lies in electric propulsion, which uses electric and magnetic fields to accelerate plasma to higher exhaust velocities.

His research focuses on a high-thrust density space-propulsion device called a lithium Lorentz force accelerator (LiLFA). “This thruster provides a more affordable means of delivering people and their cargo safely to Mars and beyond,” says Will. Recently, he was the runner-up for the 2016 MAE Research Day prize.

In particular, Will focuses on developing a model for the thrust exerted by a LiLFA. This model would tell engineers precisely how far to tweak each parameter on a rocket to achieve the optimal performance.

Most existing thrust models indicate that the thrust generated by the LiLFA is the sum of several components. For example, thrust = 1+2+3. “Before now, we tried to measure component 1 by subtracting models for 2 and 3 from a measurement of the total thrust. However, this only works if models 2 and 3 are exact. My Research Day talk was about a new thrust stand I built, which takes an isolated measurement of component 1,” explains Will. “For the first time, we're comparing apples to apples.”

Will recently submitted a journal paper on this topic with his adviser, Edgar Y. Choueiri, Professor of Mechanical and Aerospace Engineering. “While we understand many aspects of LiLFAs we still do not have an accurate mathematical model for how the thrust is generated,” says Professor Choueiri. “Will’s method for isolating and measuring an important component of the thrust will have a good impact on the field.”

Professor Choueri says Will’s trademark smile, undaunted attitude, synergy with his lab partner, Mike Hepler, and unique background in music and physics are incredible assets to his work. “Musicians often have a freewheeling and fluid way of thinking about abstract concepts, which can be quite helpful in advanced research. It is clear to me now having known and worked with Will for more than three years that his unique creativity owes quite a bit to his training in music,” he says.

Will has also developed a new type of probe to measure mass deposition from condensible propellant thrusters. The basic idea behind the probe is to take advantage of the fact that lithium coats all the surfaces of the vacuum chamber when the LiLFA is fired.

“Since lithium is conductive, we can measure how the conductivity of an isolated electrical path changes over time, and then back out how thickly that surface is coated in lithium,” Will explains. “Previously, we measured this condensation using a vibrating crystal, which was very temperature sensitive and gave us noisy data. This new method reduced the noise by 70% and is much simpler.” These measurements can be used to study the shape of the thruster’s plume.

After graduation, Will plans to leave carpentry behind—unless there is a sudden demand for wooden rockets—and work in the private space industry. Traveling to Mars, he believes, is only 10 years or so away and he wants to be a part of it. Personally, if offered the chance, Will says he would go in a second. That is if the spacecraft had enough thrust to lug along some very precious cargo: his two-year-old daughter. 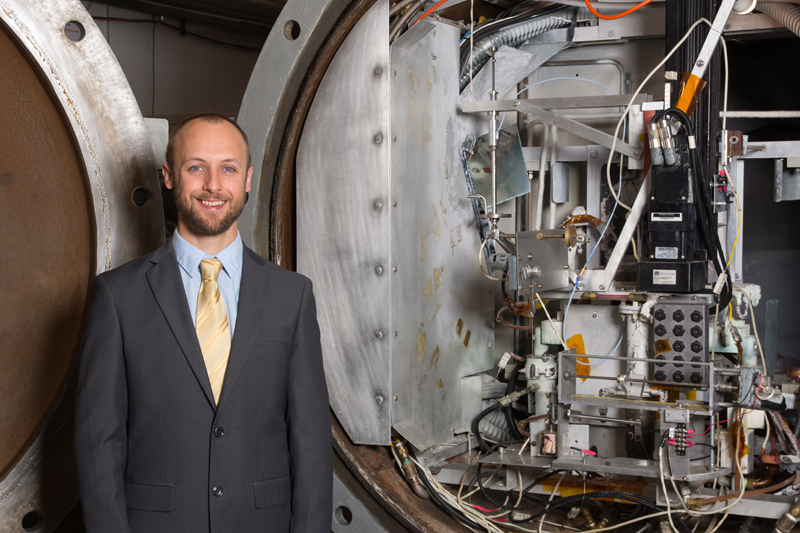