Suin Shim: Detective in the Lab – and Everyday Life

Suin Shim does not want to limit herself inside the boundary of instruction booklets. Her favorite childhood hobby was to invent new origami designs. If the directions said to make a flower, she would make a bundle of flowers and then a vase to hold them.

“I loved experimenting with different parts and shapes,” she says. “Those first creations helped me develop an intuition for structure and space, which have helped me design my own research today.”

From the time she was a young child, Suin has had a strong aptitude and interest in science and math. Growing up in South Korea, she idolized world-famous scientists.

“They seemed surreal, almost like actors on the stage, and as an undergrad student I felt that we were the audience watching their remarkable work unfold,” she describes.

So when Howard Stone, PhD, Donald R. Dixon '69 and Elizabeth W. Dixon Professor in Mechanical and Aerospace Engineering, came to visit Suin’s college, she was ecstatic. Suin had a chance to attend a master class at Pohang University of Science and Technology for graduate students and researchers.

“I was really impressed and shocked that almost every question Professor Stone asked was about the fundamentals of our work,” she explains. “By then I had spent four years in the engineering department and most of the researchers I met were focused on developing new techniques or fancy high-efficiency systems. They were not really thinking about the fundamental ideas behind them. His questions made me rethink my own work and how I wanted to contribute to the field as a researcher.”

Shortly after, inspired by Professor Stone’s visit, Suin applied to Princeton. In 2017, she graduated with a PhD in Mechanical & Aerospace Engineering. Today, she is a Postdoctoral Research Associate in the Complex Fluid Mechanics Laboratory. Her work involves an area of fluid mechanics that deals with slow-moving laminar flows, which exist on a small scale, mostly with water droplets and gas bubbles.

“Most of us think water is just water, but in reality it is so much more complex. Water may seem simple, but when it comes to small scales, there are all these different interactions happening between the gases that are dissolved within its structure or between water and air at the interface,” she explains. “The fun part is trying to predict what will happen when these competing forces come together.”

There are many origins of forces that affect fluids at the same time, such as gravity, shear, heat, and the shape of the solid surface. To explain her work, Suin says to think about a large-scale flow such as water cascading down an incline in a brook. In this example, gravity is the dominant force affecting the flow of water and causing it to pick up speed. But when water flows in a very small system such as the droplets from a kitchen sink, the hierarchy of force changes. In many cases, the surface tension of the water droplet and the effect of air flow near the droplet become more dominant than gravity.

Suin’s dissertation explored this unexpected behavior of gases at the gas-liquid interfaces. In particular, she looked at the behavior of CO2 bubbles within a microfluidic channel. Generally, conventional wisdom would suggest that a CO2 bubble generated in this type of environment dissolves rapidly. However, Suin’s findings were unexpected, showing that these bubbles do not always disappear even though CO2 dissolves very quickly in water.

“I found that CO2 bubbles don’t disappear in the microfluidic channel because of air entering the bubbles as CO2 diffuses out from the bubbles. This air that naturally exists in the water causes the bubbles not to disappear,” she explains.

Another practical application of her research is evaporative cooling. Suin developed a device with a “superhydrophilic surface” that uses a small amount of water to cool down surface temperature by six degrees within 30 minutes. She is working with Professor Forrest Meggers in the School of Architecture to incorporate her device into building designs.

“Suin has been like a detective in her research, especially as several of the projects required sorting out experimental observations that originally seemed contradictory and surprising,” explains her advisor, Professor Stone. “She then used experiments and various controls, along with physical insight and mathematical modeling, to develop an understanding of the problem. It was exciting to watch her insights evolve.”

Those physical insights often come from the most unexpected places. For example, one day when Suin was doing dishes, she began to wonder if the water droplets that fell from the tap were different than those from a wet dishcloth when they hit the bottom of the sink. This led her to study the behavior of water droplets, including a small amount of soap, and their interactions with the air as they fall.

Outside of the laboratory, Suin has been playing the piano for 25 years. Suin says the piano inspires her because she feels like a choreographer who makes music and dances with the music at the same time. “It is really amazing when I realize that I move my body following the music and that motion becomes music again,” she adds.

Like any good detective and musician, Suin is never off-duty—she is always observing, creating, and making new insights. 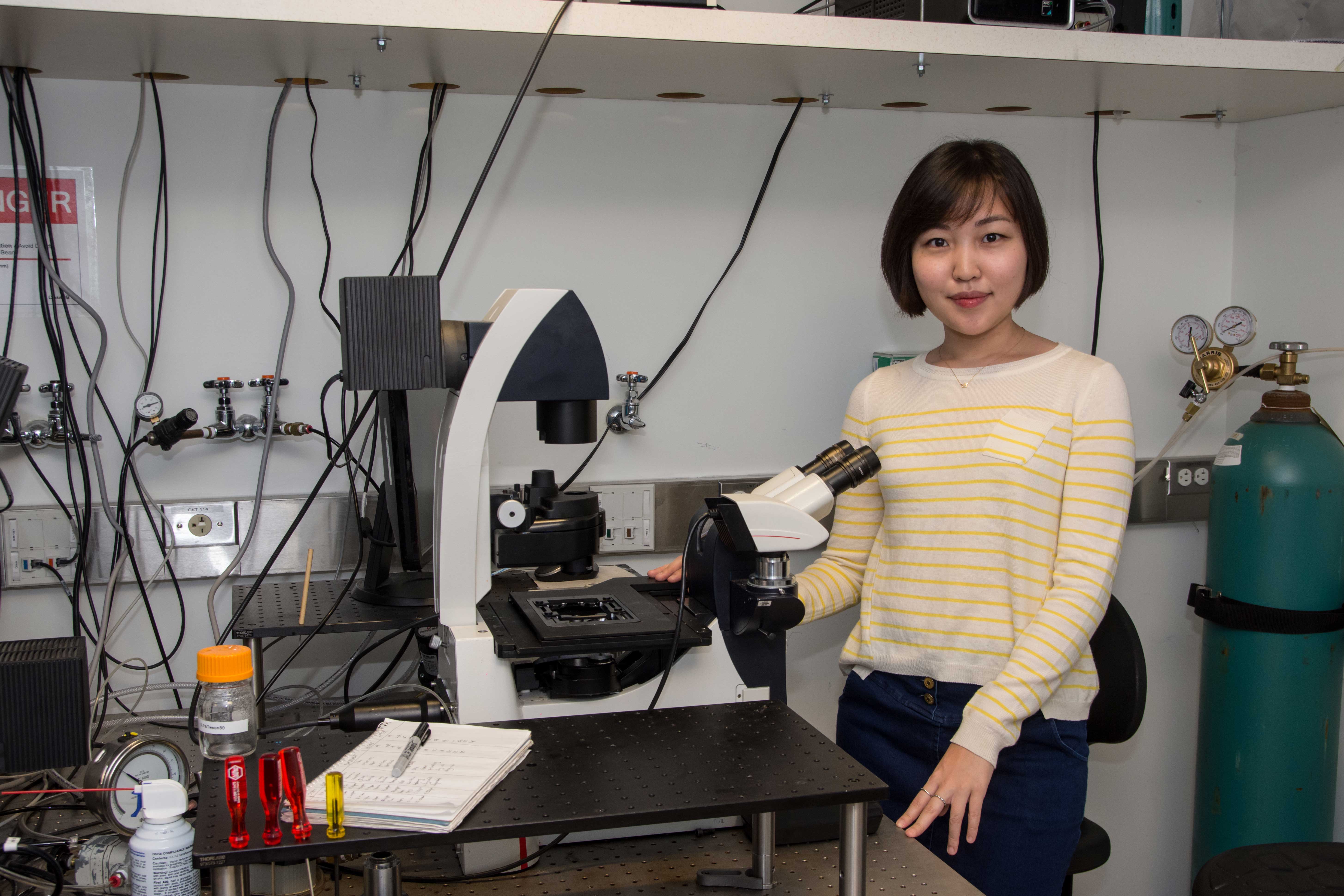