Mission to Mars: Harnessing Electric Energy to Power a Spacecraft

It was easy for Michael Hepler to be fascinated by space as a young child. Growing up, he watched in awe as his father, uncle, and cousin flew fighter jets in the U.S. Air Force. But to take that early interest and dedicate his career to spacecraft design took a passion that was innate from the very start.

“Aerospace technologies were not abstract subjects learned from books, but vivid realities discussed and lived out on a daily basis in my childhood,” describes Mike, a third year graduate student in the Department of Mechanical and Aerospace Engineering at Princeton University.   “This exposure from a young age left a lasting impression and lingering fascination that informed my decision to pursue physics and astrophysics in my undergraduate career.”

Today, while his family pilots the aircrafts, Mike helps develop the technology that will make their future missions possible. As a researcher in the Electric Propulsion and Plasma Dynamics Lab, he designs specialized rocket engines known as electric thrusters, which utilize electric and magnetic fields to manipulate ionized propellants, designed to efficiently propel spacecraft. By reducing the propellant requirements of a space mission, researchers can extend the length and versatility of conventional missions that would allow astronauts to travel to Mars and beyond.

“Electric propulsion, which uses electric and magnetic fields to accelerate particles to create thrust, is useful because it can use much less fuel to get from point A to point B,” says Mike. “However, while electric propulsion is great for using fuel efficiently in space, it produces a small thrust in comparison with chemical rockets. Therefore, it takes a long time to get to a high speed.”

To understand the advantage of electric propulsion, Mike offers the following analogy. “Chemical propulsion can lift the space shuttle to space, initially accelerating from 0 to 100 MPH in about ten seconds. Once in space, however, electric propulsion might take six days to achieve the same change in speed,” explains Mike.  “But if you can keep accelerating for weeks, months, and even years, you can build up to a higher velocity for the same amount of propellant.”

While electric propulsion has its limitations, the concept has been used successfully for nearly 50 years to power aerospace technologies. Mike and his lab partner, Will Coogan, are trying to find a way to counteract these drawbacks using a type of thruster known as a Lithium Lorentz Force Accelerator (LiLFA). Instead of using traditional compressed gases for the thruster propellant, they use ionized lithium metal.

Lithium is an ideal material, Mike says, because it takes much less energy to ionize each particle, allowing the thruster to use less power while operating. An added benefit is that lithium also extends the lifetime operation of the thruster.

“This type of electric thruster can propel a spacecraft with far more fuel efficiency than a regular chemical rocket. It exhibits improved performance, including higher thrust and acceleration, when we increase the electric current running through,” explains Professor Edgar Y. Choueiri, PhD, Professor of Mechanical and Aerospace Engineering at Princeton, who serves as Mike’s advisor.

The problem, however, is that as Mike increases the electric current he eventually hits a limit, called “onset,” which causes the thruster to operate inefficiently and start cannibalizing itself for a fuel source. Mike’s research focuses on understanding what causes onset to occur and how to delay it so the thruster can perform better and live longer.

Using fuel more efficiently is essential for more ambitious space missions like cargo or piloted trips to the Moon or Mars. “If you are planning a mission to Mars with a chemical rocket, nearly 70 percent of the payload is just fuel to get there. Since it costs around $20,000 a kilogram to put a spacecraft into low-earth orbit, any fraction of that fuel that you can reduce has enormous financial savings,” says Mike.

For as long as he can remember, Mike has been thinking about space travel to Mars. As a child, his most prized possession was a series of National Geographic books chronicling the galaxy. He spent countless hours hauled away in his room learning everything he could about the planets and stars. In the future, he hopes to be part of the team that can help solve not only the technical challenges of traveling to another planet, but also tackle the economic and political implications of achieving such a journey.

“Mars represents a fundamental and philosophically important development in transforming our concept of humanity as a space-faring species from conceptual exercise to an active reality,” he says. “The planet also has the resources for sustaining life and civilization, and presents itself as a proving ground for fundamental questions such as: “is life a general phenomenon of the universe?”

At Princeton, Mike says he is in the right place to help achieve this goal. In addition to working on existing thruster models, his laboratory encourages students to use fundamental physics and plasma concepts to explore novel designs. Outside of his interest in astrophysics, Mike runs a French conversation group at Princeton, is a member of the Mechanical and Aerospace Department softball team, and is involved in the graduate student government.

“Mike is undaunted in the laboratory. He has an uncanny drive to get things done, and done well. Mike often has that look that assures you problems will get resolved no matter what,” says Professor Choueiri.  “If I have to go to Mars one day, propelled by a lithium thruster, I want him and his lab partner Will, on my spaceship.” 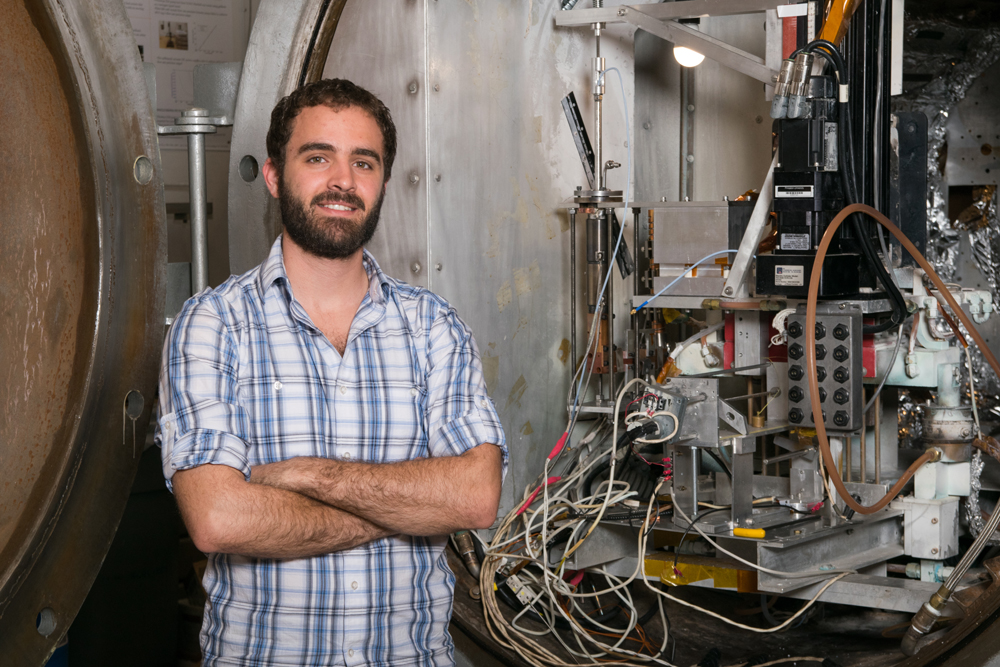