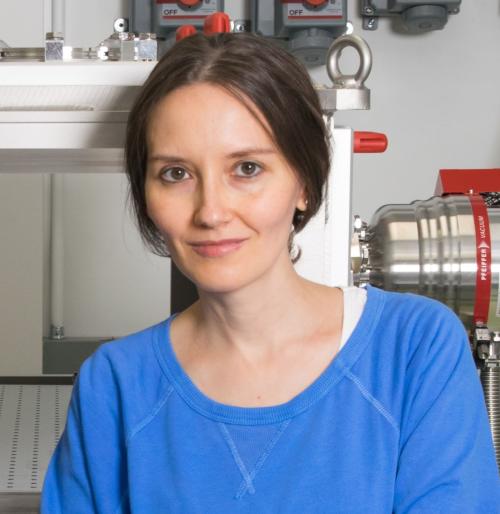 A lot in Julia Mikhailova’s world comes down to synthesis and balance. As a student in Russia, she grew up cherishing music, classic literature and arts, and dreamt of a profession that would allow her to combine artistic and scientific approaches. She was the only physics major in Moscow State University who rounded-out her education with a second degree in journalism. As a mother of young children, she works hard to maintain a delicate harmony between home and professional life. And as a physicist, she spends her days exploring the balance between forces exerted by intense light and forces that shape matter.

“I like the idea of dynamic balance as a person and as a scientist—balance between scientific patience and artistic passion, rigor and spontaneity, breadth and depth, profession and family, theory and experiment, and between the forces of strong electric and magnetic fields and forces that hold electrons, atoms, molecules, and solids together,” explains Professor Mikhailova, PhD, Assistant Professor in Mechanical & Aerospace Engineering and an Associate Faculty Member with the Andlinger Center for Energy and the Environment and Princeton Plasma Physics Laboratory.

“When I was first deciding if I should come to the U.S. I was inspired by the speeches of Shirley Tilghman, PhD, the first female President of Princeton University about the future of sciences in the liberal arts model of education. She believed that students of all backgrounds should learn how to get and critically assess scientific knowledge and that we must teach students to appreciate the importance of science and technology for the sake of our future. She also spoke about broken barriers between scientific disciplines at Princeton, and the importance of focusing on problems that appear across disciplines. And her favorite music recording was by Bob Dylan, and I’d been listening to his songs over and over at the time.”

It was this very philosophy that drew Professor Mikhailova to Princeton more than six years ago. She joined the faculty in 2013 after studying in Moscow, Russia, and working as a postdoctoral researcher in Munich, Germany. She was attracted by Princeton’s multidisciplinary frame of mind, which inspired the first project of her newly-formed group – waveform engineering – combining signal-processing and optimization methods with computational plasma physics to derive an ideal laser waveform for their experiments. Her field of experimental high-power laser science was highly technical, and she was working in the U.S. for the first time, but in only a few short years, Professor Mikhailova built all of the infrastructure she needed to run the experiments from scratch. Today, her laboratory, ETOILES — Experimental and Theoretical Optics of Intense Laser Envelopes and Strong Fields — is one of the most powerful university laser laboratories in the world, exploring the physics of intense light-matter interactions, ultrafast and high-field science, and quantum phenomena.

“Everything is transient. It is important to understand the dynamics behind the stability of materials that surround us and how they behave when exposed to high electric and magnetic fields,” she explains. “We do know something about it, but we want to find ways, quantum mechanics permitting, to peek into the multitude of transient phenomena in materials and see what is happening there in atoms and molecules, in two-dimensional crystals, inside hot dense plasmas of stars, the Universe antimatter, and our own cells.

To advance in that direction, Professor Mikhailova uses bright light delivered by a powerful laser to break atoms in solids and gases and free the electrons, thus creating a state of matter known as plasma. The dynamic balance between the forces of the laser and the forces of plasma causes electrons to accelerate almost as fast as the speed of light and follow distinct trajectories that resemble those of particles in a synchrotron. As a result, those electrons emit ultrashort bursts of intense ultraviolet and x-ray light. The spectra of these bursts consist of high-order harmonics of the driving laser and can be viewed as plasma fingerprints carrying information about their source. These bursts can also serve as an attosecond-speed shutter allowing researchers to get a glimpse of the innate dynamics inside materials. Professor Mikhailova’s group used optimization algorithms to identify a fine-drawn laser waveform that would make the production of such bursts most efficient, and is now trying to create such a waveform in experiments.

Large facilities run by National Laboratories—that use x-ray-free-electron lasers—can now provide intense attosecond electromagnetic pulses. However, these facilities are about 2 miles in length and operate at about 1,000 times the cost. In contrast, the experimental setup in Professor Mikhailova’s lab takes up only three optical tables, and the tiny plasma sources measure only a few micrometers wide.

“We have published several papers showing the potential of plasmas to deliver ultrafast pulses of shortwave radiation,” explains Professor Mikhailova, whose research is funded by the National Science Foundation and an Early Career Award from the Department of Energy. “In optimum conditions, you might be able to get brighter pulses than those obtained with free-electron lasers today. Ultimately, their intensities can approach the so-called Schwinger limit, which means they will be strong enough to produce electrons and positrons from vacuum revealing drastically new physics.”

“What makes me excited about the future, is that the high electric and magnetic fields produced in our experiments could allow us to control matter in some sense.” she adds. Moving forward, Professor Mikhailova’s goal is to work at the intersection of quantum science and plasma physics and bridge them to better understand high-harmonic emission from gases and solids and improve the conditions that create attosecond bursts of radiation. She also plans to use entangled photons to explore the limits of precision in plasma diagnostics, and use plasma to generate entangled photons and particles for quantum science.“I am proud to be able to show this type of research is affordable and can be performed at a university lab that does not have hundreds of employees,” she says. “Most important things you need are passion and patience.”

She shares that sentiment with her Optics and Lasers class, where her students “learn by doing.” On the first weeks, they begin building their own optical setups from scratch—learning how to align laser beams with two mirrors, understand what a convex lens does to a beam of light, perform imaging, build a telescope, do the magic of spatial Fourier transform using a lens, and visualize subtle air flows with the schlieren photography. “The most important themes of this course are firstly, that students learn to connect theory and practice, and secondly, that they learn to work across scientific domains by combining knowledge from different disciplines to design interesting and useful experiments and understand their results. It is exciting to see them observe the light patterns in the focal plane of a lens and realize that these patterns are mathematical Fourier transforms of various objects they put in front of a lens. Here mathematics, signal processing, and an optical experiment come together to create powerful methods based on light manipulation in Fourier domain. Applications include laser diagnostics (schlieren imaging), microscopy (confocal microscope), high-power laser technology (chirped pulse amplification and spatial filtering), astronomy (star occulting for direct imaging of exoplanets), and chemistry (pulse shaping for femtochemistry), to name a few. As the course has been designed to provide individual kits to the students, the current pandemic did not affect our learning objectives.”

Whether the setting is a classroom, laboratory, or home, Professor Mikhailova constantly draws on what she learned about balance and synthesis from the great role models in her life. Both her mother and father combined successful careers in responsible positions with being the most loving and supportive parents to their children. She was also very close with her grandmother. whose high ideals that inspired her to fight for Russia in World War II were harmonized with the patience of a school teacher and mentor of delinquent teenagers.

“I grew up amazed at both the strength and spirit my parents had at work, and my grandmother had at the war frontier, and the understanding and warmth I had at home.” She also decided to integrate experiment and theory in her laboratory, following examples of her early scientific advisors during student and postdoctoral times. They showed her that the balance between experimental and theoretical work can lead to the most fulfilling experience as a scientist.

Professor Mikhailova’s family and profession are continuous sources of inspiration and joy. She loudly encourages female students to explore careers in math, science, and engineering.

“Being a scientist can be a winding path, it very likely will be full of adversity and battles, but an enjoyable and meaningful one, and not incompatible with motherhood. Practicing self-discipline and self-administration is a key for doing well as a faculty, a teacher, but also as a mother. Having the opportunity to develop unique scientific methods, get new knowledge, do something artful that nobody else has done before and that may have the potential to change the world, learn and teach others to solve complex problems, and be a storyteller at that, — this is what makes my life full. On the other hand, I would like to tell young girls that science and engineering need them, because no real breakthroughs are possible without the diversity of viewpoints that they can bring in.” 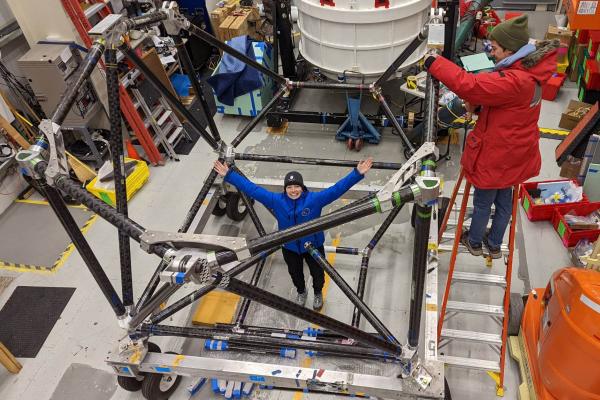 Susan Redmond: Exploring the origins of the universe through engineering