Most prospective students take the walking tour of Princeton’s campus—Isabel Cleff, ’18, took the flying one. Shortly after receiving her pilot’s license, the 17-year-old took off in a two-seat Cessna 152 and used the view from 2,000 feet to map out the dorms, eating halls, and engineering buildings.

“Flying has always been a great source of joy and confidence building for me,” says the junior in the Department of Mechanical and Aerospace Engineering. “It has also been very useful in the laboratory. When you are in a commercial plane you barely realize you are in the air. But the forces you feel in a small plane—when you climb, turn, or descend—help you understand the physics of aerodynamics in an authentic way.”

Isabel hopes her future flight plans include much higher elevations. Ever since middle school, she has chosen every school project and extracurricular activity with one goal in mind: to become an astronaut. With the Johnsville Centrifuge and Science Museum located near her hometown in Pennsylvania, Isabel spent her free time learning everything she could about the old shuttle artifacts and space missions.

One evening, during an event with NASA astronauts, she asked for advice on how to enter the space program. The astronaut responded: “study math and science, and a little flight time wouldn’t hurt either.” A few weeks later, 13 year-old Isabel convinced her parents to sign her up for flying lessons.

“I want to get humans to Mars and beyond, and ultimately I would love to be the one to take those first steps on Martian soil,” Isabel says. “Humanity thrives by acquiring new knowledge and exploring the borders of places we have never been before. We need to learn more about this vast universe we live in.”

As a junior at Princeton, Isabel continues to chart the right path. During the year, she focuses on her classes in mechanical and aerospace engineering. In the summer, she works in the field and hopes to complete her internship trifecta this year by working in the private sector, academia, and the government.

As an intern in Jeremy Kasdin’s laboratory, Isabel was responsible for fabricating an early prototype of a deformable mirror project that can be used to explore the universe for habitable exoplanets. Isabel researched components for the mirror design and developed comprehensive lists for procurement. These contributions were so significant that her name was included on the final conference paper.

“It was clear to all of us that working on technology for potential NASA science missions excited Isabel and gave her drive and passion,” says Professor Kasdin. “She worked long hours and became a leader of the summer interns.”

She was also part of a team at NASA's Langley Research Center that developed a prototype 3D printer for manufacturing multi-functional spacecraft components using carbon nanotubes. When these carbon materials are embedded in plastic they became structurally stronger and electronically more conductive. “The goal,” she says, “was to develop a cheap way to print materials with as much automation and little human interaction as possible.”

Isabel says her internships helped confirm that she wants to take the engineering route to space rather than becoming a test pilot. “I am amazed by the physics involved in building and designing a project like a 3D printer,” she says. “In the short term, it will provide a cheaper way to make materials for spacecraft, but there are also long-term applications for colonization. For example, if we want to build a colony on the moon or Mars we could send up a singular device instead of dozens of manufacturing experts.”

Fueled with an insatiable curiosity for flight and space, during her freshman year, Isabel founded the Princeton Rocketry Club with a group of friends. They started by launching simple model rockets, but this year Isabel is leading a team that will compete in The American Institute of Aeronautics and Astronautics’ International CanSat design-build-fly competition. Their project is to design, build, and launch a prototype Venus atmospheric sampling probe.

Isabel’s goals also keep her focused on fitness. She is a member of Princeton's club rock climbing team which she jokes has a disproportionate number of engineers. “I think it's something about problem-solving with our hands that gets us hooked,” says the athlete who also enjoys hiking, running, biking, and swimming.

While Isabel is undecided if she will pursue graduate school or work in the aerospace field after graduation, one thing is certain: at some point she will turn in that astronaut application to NASA. “Statistically speaking, I know I probably won’t make it into the program, but for now my goal is to be the first human to walk on Mars,” she says. “And if not, I guess I would be willing to settle for governor of a lunar colony.” 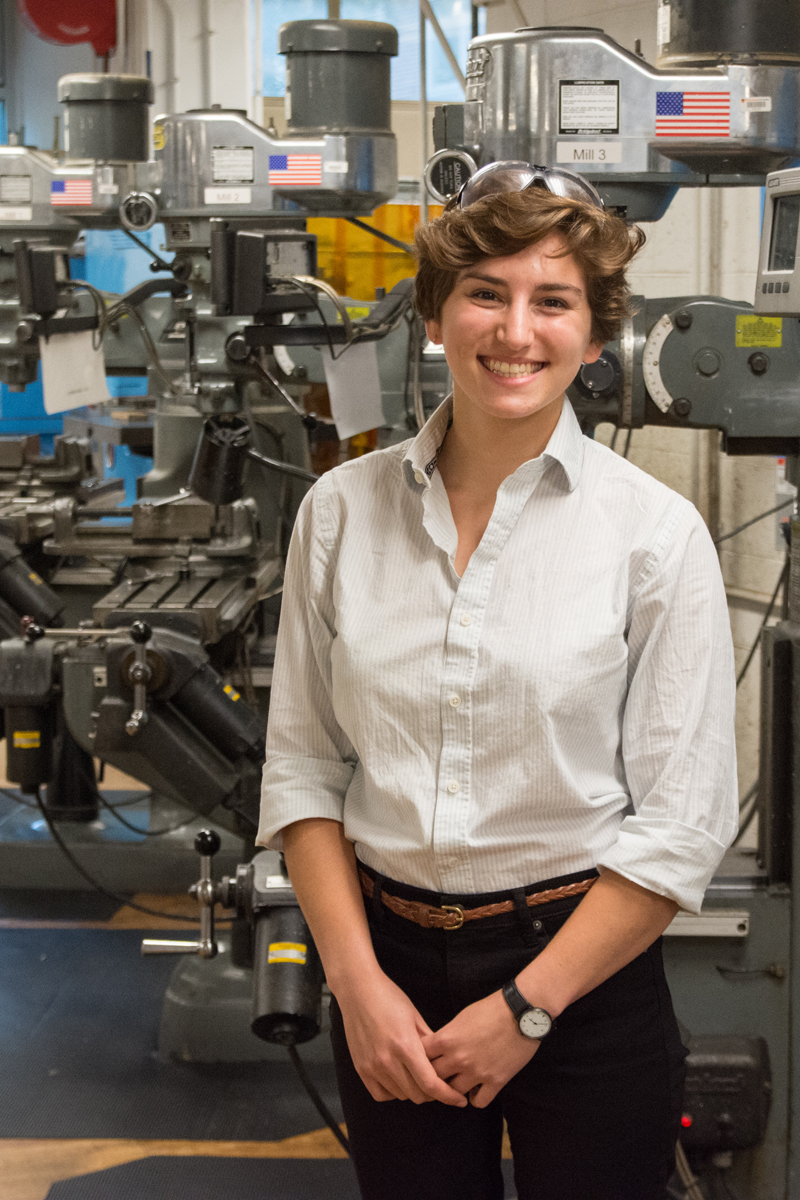