The Duo Behind MAE’s Machine Shop

Although several years apart, machine shop manager Glenn Northey, and shop associate Al Gaillard’s worlds aren’t far apart when it comes to their respective entrance into the field of mechanical design. With a passion for building, both Northey and Gaillard began their careers tinkering with the materials surrounding them to create things.

In Northey’s case, he was always working on building motorcycles, engines, and cars. Fittingly, he began his career as a technician at the Plasma Physics Lab. In 1975, he finished an apprenticeship as a machinist at Princeton. But while he knew how to put things together and make them work, he wanted to know why, so he returned to college to study engineering. Then in 1987, he came to the School of Engineering and Applied Science (SEAS) as its machinist and an instructor and in 1994, transferred to Mechanical and Aerospace Engineering (MAE) to instruct full time.

Gaillard wasn’t building engines, he said, but he was constantly building something. What started with those quintessential little colorful plastic bricks grew into projects made from wood, metal, or whatever materials he could find; he made an “amalgamation of whatever was my creative spirit that day,” he said. This desire to build stayed with him in college, where he helped supervise students in a sculpture lab, spent time in woodworking and then worked on set design. Following graduation, Gaillard worked on stage crew for more than four New Jersey theaters, most recently at McCarter Theater. It was working there that led him to MAE, as he found the job posting on the University’s website.

In his interview with Northey, it only took about 40 minutes to discover that Gaillard had a good background and brought a lot to the table, said Northey. “Al brings an offset from me. I’m more mechanical engineering based and Al is more arts based. It’s a good combination because he can make things aesthetically pleasing, where I can make them work. But I’m teaching him how to make them work also.”

That combination also works well for the students who cycle through the machine shop. All juniors in MAE are required to take Engineering Design (MAE 321), the course that Northey and Gaillard teach together with Professor Luigi Martinelli. Martinelli teaches the two theory lectures of the three-credit course, while Northey and Gaillard teach the lab lecture and work with students in the lab.

MAE 321 is a gateway course for both the mechanical and aerospace engineering programs and builds the foundations of all advanced design courses offered in MAE as well as senior independent work, said Martinelli, who was asked to take on the course five years ago. Martinelli wanted to develop the course as an introduction to modern engineering design processes and tools, to bridge the applied mechanical and aerospace sciences with the engineering practice of designing and manufacturing, he said.  “Since the inception, I relied on Northey’s partnership and input to develop the rapid prototyping/manufacturing portion of the course.”

Students develop hands-on experience of industry standard Computer Aided Design (CAD) and Computer Aided Engineering (CAE) analysis software, said Martinelli, an aerodynamicist by training. “To this end, we have built on a set of CAD tutorials that Northey had started developing a year earlier.”

In fact, knowing he wanted to write an online section to the course inspired Northey to go back to school in 2013 for his Master’s degree in liberal studies, which included a certification in writing online courses. Northey’s dedication is clear in his desire for continued professional development and interest in the students, as is Gaillard’s interest in professional development, who designs and builds new projects in his free time under Northey’s tutelage.

What makes Northey and Gaillard excellent respectively and as a team is, according to Martinelli, “what makes somebody good at anything: Passion in one’s work, pride in good craftsmanship, a genuine desire for continual professional development, professional ethics, and most of all, the ability of not taking oneself too seriously!”

Seventy percent of a student’s grade in MAE 321 is determined by a major design project. Following engineering practice, students must come up with a design concept, sell it (give an elevator pitch that explains what they want to build and why), and then provide a comprehensive design review, explained Gaillard.

While most years the project is unrelated to other courses, a recent class of students worked with Professor Naomi Leonard’s graduate student and MAE 321 teaching assistant, Peter Landgren, to build autonomous submarines that relate to Leonard’s research interests.

“We had a real set of specifications; we actually had a customer,” said Northey.

Working with Northey and Gaillard helped Landgren learn a lot about the practical elements of design and working with undergraduate students. Both Northey and Gaillard provided good design feedback throughout the project, which helped the students avoid future pitfalls or dead-ends, said Landgren. “One thing about Glenn and Al that particularly impressed me is how they were deeply involved with the students’ projects from day one.  They understood the overall design objectives, and therefore were able to give deeper insight throughout the design process.  This commitment really made the class better for the students and helped us complete some difficult objectives.”

Until now, Northey has taught only the lab portion of Mechanical Design. With Professor Martinelli going on sabbatical next year, however, Northey will teach both the course and the lab. Look on the registrar’s site and Northey is listed as the course professor.

“It’s on my bucket list,” Northey said. He explained that he’s taught the lab for so long – and even accompanied Professor Soboyejo to teach manufacturing design for a week in Nigeria, for two consecutive years – but he’s wanted to teach the entire course on his own – to fly solo.

With enthusiasm for his supervisor and partner, Gaillard chimed in: “All the students are happy for you.”

From MAE 321 to building a search and rescue robot in MAE322 Mechanical Design to helping non-engineering students restore a vintage motorcycle in Professor Littman’s Freshman Seminar, “The Art and Science of Motorcycle Design,” Northey and Gaillard are an indispensable and valuable team supporting all the students that enter their shop along the way.  There are some projects that began in the shop and ended up in production with large companies: active suspension, which will be introduced by Ford Motor Co., for example.

Martinelli confirmed that students rely on Northey and Gaillard’s manufacturing skills all throughout their junior and senior year - from MAE 321 to their senior independent projects. “It is not an hyperbole saying that Glenn and Al are the bedrock for all practical mechanical engineering aspects of the MAE curriculum.” 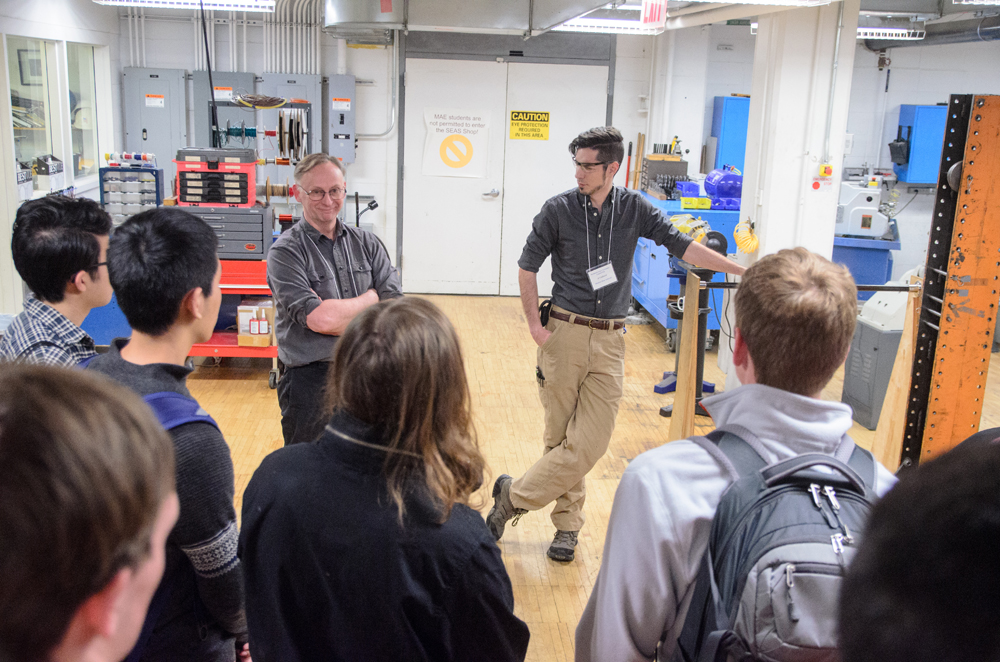