The best teacher Jonathan Prevost ever had was himself. His classroom was an old garage, his experiment was a busted Camaro engine, and his textbooks were library loaners on Professional Assembly Language, Intro to Electronics, and Modern Control Theory. For his final project, Jonathan programed a new engine, installed it, and tweaked it to pass New Jersey inspection.

Jonathan did not know it at the time, but his independent learning style would one day help him teach others too. “I believe strongly in self-directed learning or autodidactism—the idea is that you do not learn from others directly but that you learn through your own experiences,” says Jonathan, who is Senior Technical Support Staff in the undergraduate teaching labs of the Department of Mechanical and Aerospace Engineering.

“I tutor more than I teach. Instead of casting a wider net, I find focused teaching is more efficient and effective—it is the most personable way to figure out where a student is with their knowledge. I am always tailoring my next question to the individual.”

As a young child, Jonathan felt compelled to fix everything around him. When he was 10 years old, he reconfigured a handful of coaxial cables and created a system with a switch that could easily run the VCR, Atari, and Nintendo without going behind the TV.

“Engineers have problem-solving minds. From a very young age, I had this innate curiosity to tinker and figure things out,” he says.” I used to enjoy fixing up old lawnmowers and making them run faster. There was a real sense of pride that came from rebuilding a motor and then using it the next day to cut the grass.”

A few years later, on Christmas morning, Jonathan received his first computer and it changed his life. “It was even better than books,” he describes. Jonathan began to teach himself computer programming, an act that would lead him to Princeton years later.

Jonathan went on to study mechanical engineering at Ohio State, but was unable to finish his senior year due to a family crisis. It was tough to find a job without a degree so Jonathan—who also happened to love animals—ended up working as a vet technician in his father’s practice.

However, his salary wasn’t enough to pay the bills. After computerizing the practice’s entire accounting and records system, Jonathan had an idea. To make extra money, he started a help desk business for other small businesses. “Before there was Geek Squad, I was the Geek,” he jokes.

Several years and many clients later, an instructor in the Princeton astrophysics department hired Jonathan to write code for a research project. Impressed with his work, the instructor encouraged him to apply for a job opening on campus.

“I was on vacation in New Hampshire when they called me. I remember writing my resume from memory because I did not bring a computer with me. I did not think I had any shot at getting the job, since my education was nontraditional. I had a lot of experience, but I was almost completely self-taught,” he says.

It was clear from the first interview, however, that Jonathan was a perfect fit. “It was pretty surreal the first day I walked on campus. Here I am, at one of the most prestigious universities, teaching a degree I did not finish. I thought all the students were going to be smarter than me, but it turns out we just had different investments of time,” he describes.

In fact, Jonathan’s self-starter approach inspired many of the students to apply their knowledge in a new way. He started in a computer support role and as a technician for electronics research. As time went on, he began to take on more of an instructional role.

One of Jonathan’s favorite courses to teach is MAE 412-Microprocessors. For the final project, students design an automated model railroad train board using microcomputers.

“Electronics are tricky. You don’t see electrons until it hurts or something breaks. I like to joke that mechanical engineers always want to a find a mechanical solution to an electronic problem,” he says. “A lot of the seniors are not comfortable with electronics, so it is fun to watch all of the critical thinking that develops. They use questions to answer their own questions. I like seeing the light bulbs go off in their head.”

Some projects, he says, you never forget. “There was a flying submarine we tried to control under water. It was neat, but they did not waterproof the electronics right. It was fun for about three seconds,” he jokes.

Jonathan also enjoys teaching Controls 433. Students often see, for the first time, how math can be applied to something tangible. For example, the last project involves using applied math to balance an inverted pendulum.

In his role, Jonathan guides the seniors with independent work and is the go-to instructor for electronics questions. “With traditional courses there is more of a ‘let me get it done’ attitude and relief comes from a grade or completion. With independent work, they really focus on the quality of the work. I love when you watch them solve their own problems,” he says.

Someday, Jonathan would like to finish his degree. But for him, the end prize has never been important. The highlights are always in the quality and value of the process rather than the outcome. 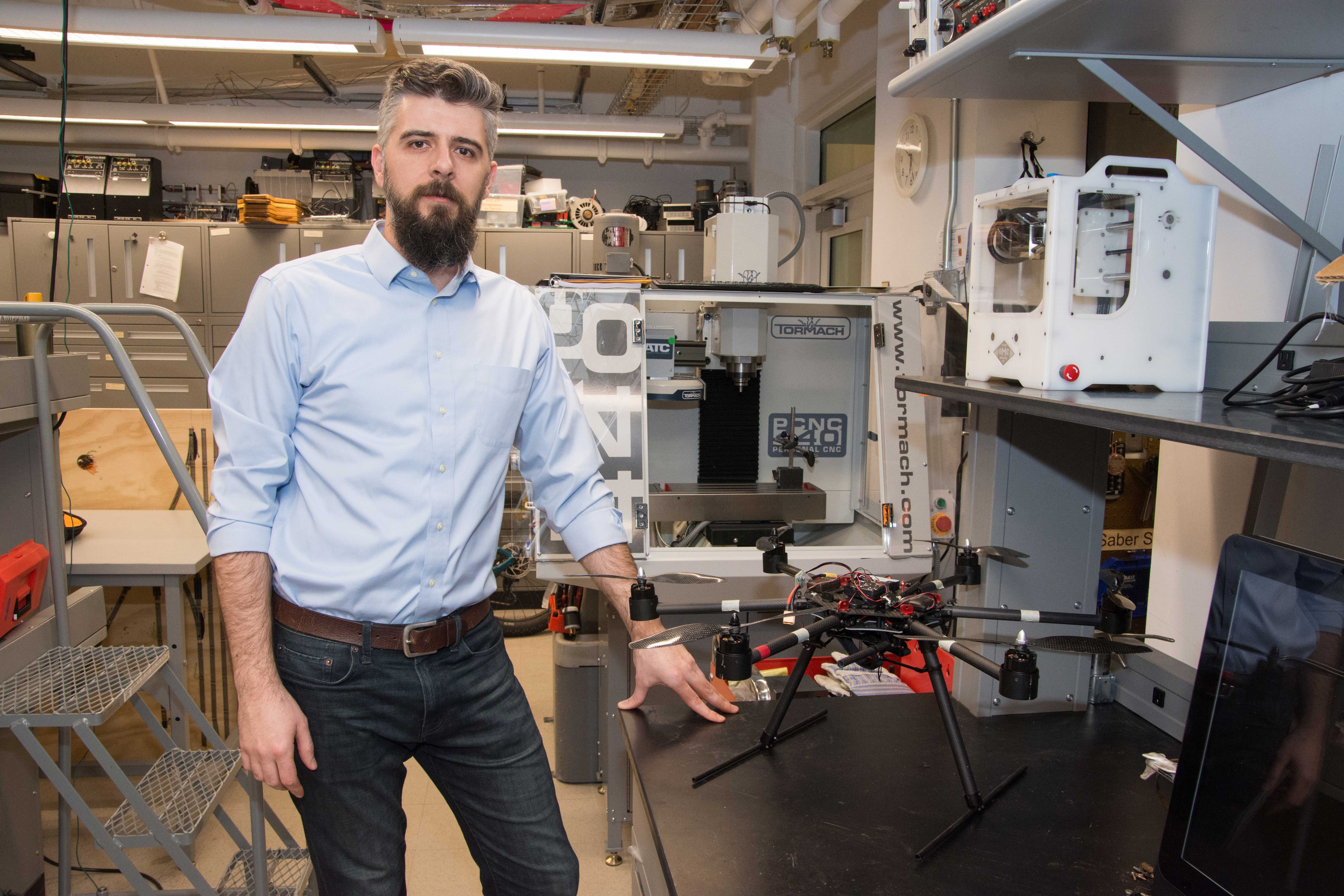