Sometimes the things we least expect, or think we want, end up defining us the most. That is what happened to Lamyaa El-Gabry, PhD, when she started her first job and was assigned to a rotation in heat transfer at General Electric.

“I despised fluid mechanics classes as a student. I told myself—just get through the next six months and you’ll move onto a neat assignment in controls and vibrations,” recalls Professor El-Gabry, a lecturer in the Department of Mechanical & Aerospace Engineering who came to Princeton in August 2017. “Turns out, controls wasn’t that fun, and ironically I asked to go back to heat transfer for my third rotation.”

From that first assignment fueled a lifelong passion for teaching and researching in the field of fluid mechanics and thermodynamics.

“I had to design a new bucket for this 7H gas turbine,” she says. “What I loved was that it wasn’t a matter of just plugging and chugging. I had to think about how I was going to model it, any trade-offs I was going to make, and what limits there were.”

That was when she realized that heat transfer (cooling) was really the enabler in any system. “It was exciting to think that the work I was doing was enabling an entire piece of technology to happen,” says Professor El-Gabry, who received her PhD in Mechanical Engineering from Rensselaer Polytechnic Institute in Troy, New York.

Going Back Home: Teaching in Egypt

In 2006, she decided it was time to venture into academia and accepted a faculty position at the American University in Cairo. “When my parents immigrated to upstate New York from Egypt I was in first grade so I always wondered what it would be like to live there,” she says.

Cairo quickly felt like home. Though she did bring some of America with her, Professor El-Gabry joined a softball league with a group of expatriates living in her community.

For more than ten years, Professor El-Gabry brought engineering to life in overseas classrooms. Whenever she wanted to make a course more engaging, she would think back to the classes that first sparked her interest in science and engineering. Her high school physics teacher would use Slinkies to demonstrate theory and her auto mechanics instructor gave them just a few tools to fix up an old car engine.

“Anyone can stand up in a lecture hall and do equations. What students need is to see the value in what they are doing,” says Professor El-Gabry.

To accomplish this goal, Professor El-Gabry puts learning into context. For example, her class has taken field trips to engine overhaul facilities to see what parts look like and measured the power consumption of the HVAC system at the University. This semester she plans to take her students to visit the Princeton power plant.

“They will be able to see how the thermodynamics we talk about manifests itself to produce heat and power for the campus. In the future, I’m hoping if the Princeton power plant needs an upgrade it could become part of a future course project,” she says.

Professor El-Gabry has also achieved this hands-on approach through community based learning initiatives. In Cairo, there are some very poor areas that have no government infrastructure at all. As a result, many kids are living without running water and formal schooling, spending their days pedaling in the streets.

As part of an introductory engineering course, Professor El-Gabry had her students design and build toys for children living in these harsh conditions. The best part, she says, is that the kids had an opportunity to learn about the process too.

“Other than a ball or hopscotch, the kids didn’t really know what a toy was, and yet they had such profound input. It was an example of how overeducation can sometimes make you more timid and undereducation, at times, can make you more imaginative,” she says.  “It was an incredible experience for the students. By the end of the semester, they were going back to the communities on their own to fly kites with the kids.”

Professor El-Gabry loves to help students go that extra mile. In Cairo, she helped a group of students find and start a Fab Lab. The small, safe, student-run workshop, which was open 24/7, had mills, lathes, 3D printers, laser cutters, and manual and power tools. If a student had an idea, they could draw it in a CAD software package, and then manufacture a working model in their hand.

“It is pretty revolutionary. In the old days, you would need to be endowed financially to make a prototype. I was really proud of the students for being part of the Maker revolution and enabling others to be innovators as well,” she says.

Like her teaching philosophy, the bulk of Professor El-Gabry’s research stems from that first assignment at General Electric. Gas turbines use heat to fuel power plants, jet engines, and spacecraft. When hot gases make their way down the turbine, they rotate the shaft to produce power or generate thrust.

“In the gas turbine industry, there is a lot of interest in achieving higher temperatures to make the turbines more powerful and more efficient,” explains Professor El-Gabry. “But that only works if you have materials that can withstand the high temperatures, or coolants to remove the heat.”

Professor El-Gabry’s experimental research explores ways to cool down the blades. Some ways to do this are to create cutouts within the blade that you can pass a coolant flow through (internal cooling) and through film cooling where a thin layer of film protects the external surface from the hot gas.

Her experimental research has looked at these single film-cooling holes on a large scale. “When you go large-scale, you can get very detailed measurements of the flow field velocity and the turbulence levels. We take all of that detail we’re learning and use it to validate computational models,” she says.

She also looks at actual hardware. By testing on large-scale realistic experimental rigs, Professor El-Gabry can see how the coolants interact with the mainstream flow.

“We are looking at where the coolant ends up,” she explains. “Does it stay at the wall as planned? Or does it get wrapped up with the mainstream flow and carried away, leaving the surface unprotected?”

Professor El-Gabry is also looking at the losses created by the coolant. When coolant is introduced, the flow field has to overcome an additional obstacle when compared to a smooth surface. Her research tries to assess how these losses affect the aerodynamic performance of the turbine.

Two summers ago, she was also involved in a biomimicry experiment at NASA’s Glenn Research Center that used nature to find solutions for engineering problems. Harbor seals use their whiskers as a sensor to track the wake of their prey. At the same time, the whiskers themselves do not create much wake when they sense objects.

Professor El-Gabry’s project involved examining the geometry of these seal whiskers to better understand how flows can pass over objects with little detection. If you can create less wake in a gas turbine, less power will be lost in the heat transfer process.

From the private sector to government labs and academia, Professor El-Gabry says she is thankful to have had the opportunity to work in so many different areas, including industry, government, and academia. But no impact has been greater than that of her students.

“Research in academia is the most gratifying,” she says. “You not only have an opportunity to impact the science, but you also are helping educate generations of students. It is such an honor and I am looking forward to getting started at Princeton this fall.” 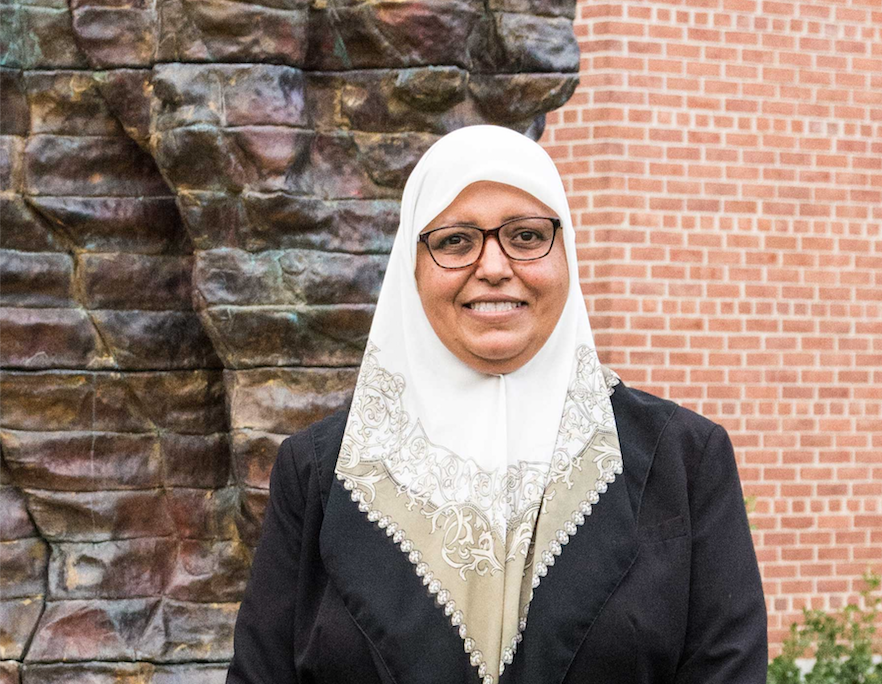